A recently healed Superman and friends take on Brainiac before he assimilates the Earth.

There are spoilers in the Superman: Doomed story line here. This is the third part of the three stories released today. Make sure to read ACTION COMICS ANNUAL #3 and SUPERMAN/WONDER WOMAN ANNUAL #3 first before jumping on ACTION COMICS #34.

First and foremost, it is fantastic to see DC do an opening page that updates readers on what is going on in this series. Writers Greg Pak and Charles Soule have done a lot with Superman and the secondary characters, spread out through numerous books, so having this little one-page insert, which is designed like a page from the Daily Planet, that explains what has happened here is a wonderful way for readers to get on board. No one will feel alienated or lost because this page exists and does a fine job at explaining what has happened.

This issue is crazy. It's chaotic. It's a ton of fun. After reading both Annual tie-ins that happened this week, there is a great flow between the issues. ACTION COMICS #34 is the tail end of an all-out war, so folks just jumping on here will feel like they were tossed into Mardis Gras just after waking up. As much as that sounds like a bad aspect of this book, it's something I found most interesting.

It's the world against Brainiac, and while the battle is fun and entertaining, the ending of this issue, which ties into earlier issues of BATMAN/SUPERMAN, is what really got me excited. Pak is really doing a fantastic job at utilizing characters and stories from previous Superman books and connecting everything, no matter who silly the other stories may have seemed at first. This story feels more like an event, but in a good way since everything is interconnected so well.

This book features two artists I really love: Aaron Kuder & Scott Kolins. While the art looks great throughout, Wil Quintana's colors make the action explode off the page. His shading and color transitions are so smooth and he makes those characters pop off the page and gives them a great amount of depth. As a whole, the team did some great work with establishing shots, really setting up the chaos in this issue.

In order to get a full scope for this issue, this week, you need to read up on ACTION COMICS ANNUAL #3 and SUPERMAN/WONDER WOMAN ANNUAL #3, which also came out the same day as ACTION COMICS #34. That's a lot of reading for one story in a week as well as a lot of changes with the character and story. It's a bit much and because of how much came out, the big changes don't have as much impact as the rest because they don't get a chance to settle, especially if you're reading everything back-to-back.

Superman: Doomed has been a back and forth story for me. At times, it's a complete home run and really moves the story forward and at other times, it feels like a bit of filler. All three Doomed issues this week were great, but ACTION COMICS was really the stand-out for me. This issue worked on numerous levels and was incredibly captivating. Both the art team and the writing are wonderful and that cliffhanger has me hooked. Overall, I highly recommend this issue. 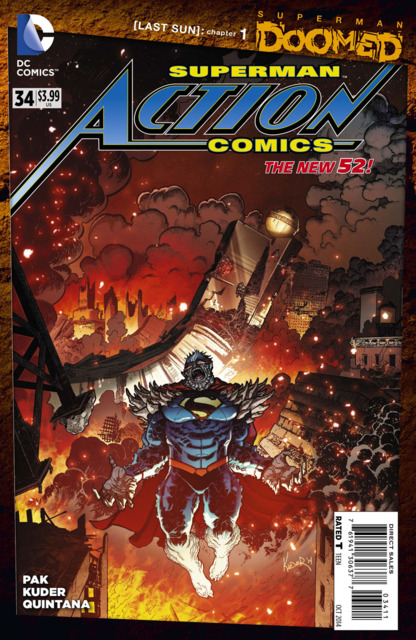