Superman has become an enemy of the state!

ACTION COMICS #32 does a fine job at building on the DOOMED storyline without rushing. This issue sets up the idea that there's little hope for Superman, as he cannot control the infection from Doomsday as well as he thought he could, which leaves America no choice but to make him an enemy of the state. The man who once protected the country and the world is now a threat to those same people. This is a very interesting turn of events and really elevates the story to a new level.

What writer Greg Pak does extremely well here is building on the fact that Superman is having trouble controlling this infection and no matter how hard he tries, it seems it's never enough. We see a very different Superman here. One that is struggling with himself and trying his hardest to just not hurt people. He's extremely well-written for the situation that he's in.

The stand-out character here is Steel though. Pak has his voice down and makes him into the hero he truly is in this issue. Steel jumps into a fight so Superman doesn't have to because he may lose control. It's fantastic to not only to see the full vision of this character but to also see him as a stand-out hero. Someone give this guy his own series.

Seeing Scott Kolins are here is a bit of a shock because fans may be used to seeing Michael Atiyeh's colors along with it. The two go hand-in-hand. However, here, Kolins' art gets the Wil Quintana color treatment. It may be hard for Kolins fans to handle right away, but overall, Quitana's colors add a whole new dimension to Kolins' work. These two put together some amazing artwork in this issue that still has Kolins' style, but with some big, bold colors and fantastic shading that Quintana is known for.

The final scene is a doozy and without spoiling anything, it's well-played and only leads to something larger. The pacing for the final paces is suspenseful and thrilling. It will make you want the next story for this arc right away.

The first time I read this, I wasn't a big fan. The book felt slow-paced and seemed like a ton of filler. After sitting on it and thinking about it and then reading it again, I felt the book just needed some time to sink in. However, the opening to the book is a bit slow, which is what really caused the rest of the issue to feel like that. So, all-in-all, the opening five pages are what really brings this whole book down a bit, which stinks because ACTION COMICS #32 is a good read.

DOOMED continues to be one of the better Superman story lines since the start of the New 52. Greg Pak does a fine job of really making the reader feel for Superman and understanding the struggle he's going through. The standout character here is actually Steel though as he rises to the occasion to help out a fellow here. The art is crisp and brilliant and the issue leaves the reader at quite the shocking end point. The world is really changing around Superman, especially when it comes to how other governments handle him, so ACTION COMICS #32 does its job of moving the story forward while entertaining the reader. 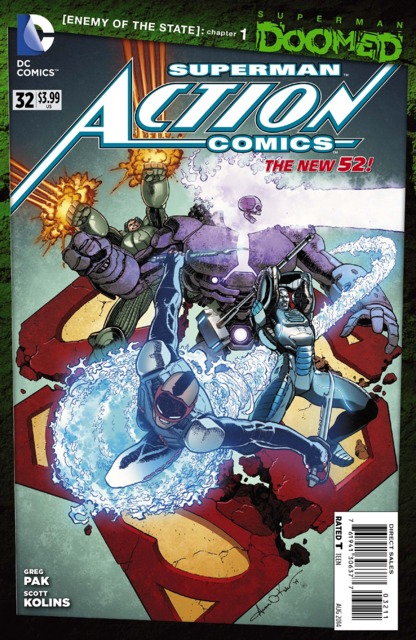