While fighting a monster that has surfaced in Venezuela, Superman runs into an old friend.

Last issue we caught up with Lana Lang and witnessed a couple sticky situations she found herself in. As an electrical engineer, she is currently working with a non-profit organization in Venezuela. Too bad a giant monster just crawled up from beneath the surface to terrorize everyone.

It's clear from the cover that, somehow, Superman will end up here to help out. You might wonder why or how Superman would know Lana was in trouble halfway around the world but there is a reasonable explanation for their reunion and it works. Superman fighting a giant beast might not seem overly flashy but it does allow him to use his strength and abilities rather than have to hold back.

Greg Pak makes this more than just Superman fighting giant monster. He shares another moment from Clark's past that reminds us where he came from and what it must have been like discovering his developing powers. The interactions with Lana are a plus as it's great to see the familiarity these two share. Pak also introduces another threat to the mix that will further complicate things down the line. Amidst all the action, there is an underlining look at Superman's thought process as he is forced to make a tough decision.

I've really gotten used to Aaron Kuder's art already. This is only his second issue (fifth if you count the three Villains Month issues) and he seems to be right at home already. Pak and Kuder are making a great pairing on this title.

On the surface this appears to mainly be Superman vs a giant monster. This issue does set up a few upcoming plot points and is split between the action and set up. You do get a sense that things will kick into gear next issue.

I am digging Kuder's art but a couple times it felt as if Superman was a little older than he's supposed to be in the New 52.

Greg Pak delivers a lot of action as we see more of Lana Lang in Superman's life. Fighting a big beast allows Superman to cut loose a little. It's not just non-stop action as we are introduced to some new elements as well as get a chance to see Superman struggle with the decisions of his action when it comes to saving multiple lives. Aaron Kuder doesn't miss a beat and keeps up with the action in Pak's script with ease. Pak is setting up a bigger story and you'll want to be on board to see what's coming up. 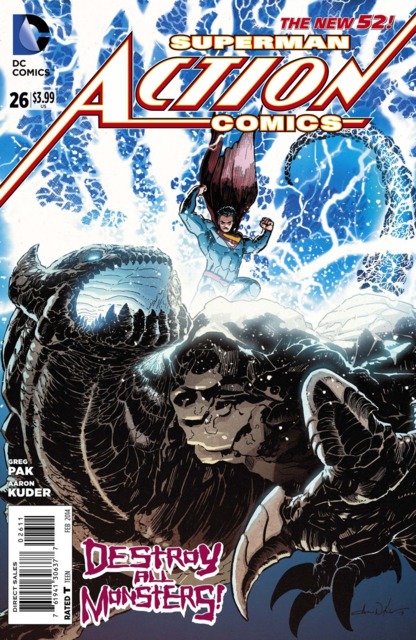