If you read FOREVER EVIL #1, there were some questions about Lex. We can find them and more right in this issue!

There's nothing like jumping forward a bit and discovering things have changed with no explanation. Part of the fun is the 'wait and see' approach as we are soon treated to the story that lead up to the changes. When we saw Lex Luthor in the opening of FOREVER EVIL #1, there were a couple changes - he was out of prison and his scarred face was no longer scarred. That's where this issue comes in. Leading up to the events we saw in the first issue, Charles Soule also gives us some great old-fashioned Lex Luthor action.

Lex is a complex character. Soule manages to illustrate that as well as what makes him such an interesting bad guy. He's a smart and ruthless businessman but also willing to put people's lives at risk to make a point. Being able to hear his thoughts via the inner monologue is treat as well.

This issue is a good example how a Lex ongoing or mini could work. We get to see some of the layers to his character and even without an appearance by Superman, there is plenty to see and plenty to keep us interested.

There were some moments where the art became a little distracting. It seemed to mainly occur when characters had their heads turned to the side and happens on more than one occasion.

We do have an interesting look at Lex but the end of the story felt a tiny bit rushed to line up with the opening of FOREVER EVIL.

Are we getting Villains-overload? We are but when you have a complex character like Lex Luthor, you can't resist having a good time. Charles Soule does a great job delving into what makes Lex tick. His inner monologue is just what we'd want to see in a Lex-solo story. The art is okay but there are some minor distracting moments that pull you out of the story. If you've been wondering how Lex changed and moved into the position seen in FOREVER EVIL #1, you'll definitely want to check this out. Charles Soule gets who Lex Luthor is and that's always great to see when Lex is given the spotlight. 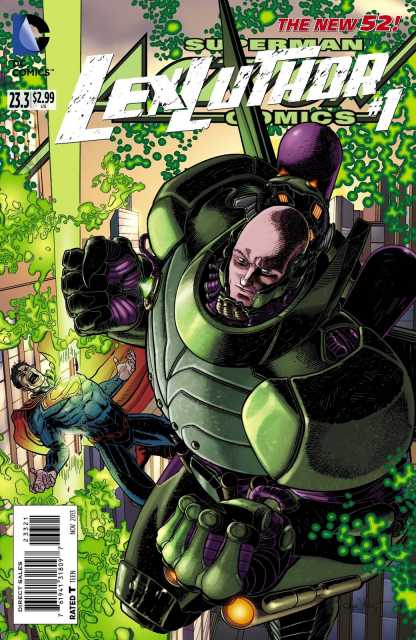