Villain's Month invades Action Comics as we learn the origin of the enigmatic Cyborg Superman.

Setting aside the fact that this is a Supergirl villain with Supergirl's creative team somewhat inexplicably flying the flag of a Superman title, this book is a fascinating, meaty look at one of my favorite pre-New 52 villains who seems to have gotten the better end of the re-imagining equation. The new character design is a great deal more unique (as much as I loved the old one, it really was just "what if we took the Terminator poster and slapped it on Superman's face?), as well as having a much more modern sensibility.

Michael Alan Nelson's reveal of Zor-El as Cyborg Superman was a truly jaw-dropping moment at the end of the last issue of Supergirl, but it also made a lot of sense from a storyline perspective and had plenty of potential to have a great follow-up. That is definitely cashed in as we see Zor-El's sibling rivalry with Jor-El inspire him to try and save Krypton, or at least Argo where he and his family live, in his own way. There's a great bit of projection when Zor-El accuses his brother of being unable to overcome his ego and abandon his spaceship program when, in fact, his own ego is clearly the more fragile. Nelson really does a great job of making the reader both pity and hate the second-rate scientist. While we see this losing battle, we cut back and forth to Brainiac finding the ruins of Argo and saving Zor-El, only to excise his memories, as well as a great deal of his organic matter, and make him the abominable creation we know him as. He then sets him loose on the galaxy to find other beings worthy of being upgraded to perfection.

Mike Hawthorne is on pencils and inks with Daniel Brown supplying the colors, and the two of them do incredible work. This issue joins several others across the superhero genre in crossing over heavily into sci-fi, and the art is a big part of what makes that work. The colors are very distinct and use a wide, deep palette to show the myriad of strange, alien locations that Cyborg Supes journeys across. The linework is incredibly distinct and clear and the level of detail on every panel makes me hope that this isn't a onetime team-up by this writer/artists team.

As much as I love Cyborg Superman's new look, there's no good reason given for why he looks almost exactly like Kal-El. His hair is even given a completely unexplained dye-job (Zor-El is blonde, but at some point during his upgrade his hair apparently turns black) and his skull structure seems needlessly altered to more resemble Superman. The issue's story is a fascinating one, but it doesn't explain a lot of Cyborg's motivations in Supergirl (his being on the world he's found on, why his sole driving desire apparently went from the pursuit of "perfect" beings to recovering his own memories and form). This may be explained in future issues, but it seems like something of an elephant in the room at the moment.

Plot quibbles that extend beyond the pages of this particular issue certainly can't keep it from being an extremely entertaining and eye-opening read. Brainiac is definitely becoming one of the bigger behind-the-scenes power players in the New 52 and this issue certainly feeds into that narrative. Nelson does one helluva job making Cyborg Superman into a compelling, somewhat tragic figure, and I actually like that he doesn't lean into the "tortured villain" trope too heavily. Zor-El was a jerk BEFORE his transformation, he's now just a more driven, powerful jerk even if he DID have the best of intentions. I may have some objections to how Villain's Month is being handled, but that can easily be put aside as this issue stands fantastically on its own. 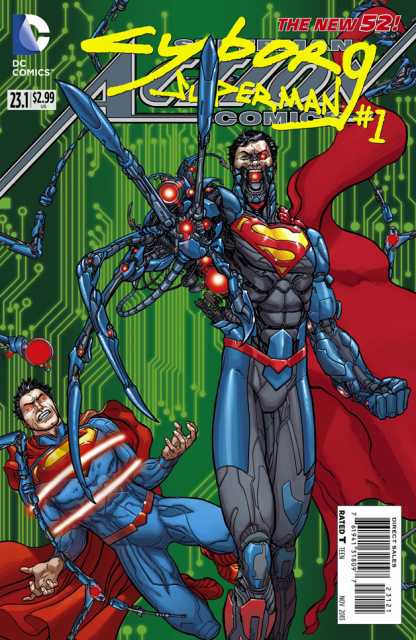