Lex Luthor has unleashed his latest attack against Superman. Things aren't looking to good for our hero. There's also a back up on the early days of Jor-El.

The story continues to take place 'one year ago.' It's great seeing this version of Lex Luthor. The younger version we saw previously in this series just didn't have the right feel. While Lex has some incredible resources added to his arsenal since the original 'five years ago' time period, he has more of the feel that we're used to and expect.

Dr. Shay Veritas plays an important role in this issue. Introduced in SUPERMAN #13, we get to see a little more of what she's capable of.

A common complaint about Superman is he's too powerful. Due to what happened last issue, we do see his power slightly diminished. This allows us to see him handle the situation in a different manner as well as needed the help of others.

Tony Daniel's art is great to see. His version of Superman just looks so right. Whether he's simply hovering during a conversation with his cape flowing or throwing punches at a huge threat, this is what Superman is supposed to look like.

There's a back up I wasn't aware of showing a younger Jor-El in action as well with a story by Scott Lobdell and art by Philip Tan.

When Veritas was first seen, we had no idea who she was. We still don't know despite this story taking place a year ago. It could just be a matter of letting the story unfold but with the amount of resources she has available, it's a bit of a stretch, even for a comic book. Having the ability to teleport to another galaxy seems like a pretty big deal for the setting of the DC Universe.

In the back up story, there is a tiny revelation about Jax-Ur, the first Kryptonian to be imprisoned (later) in the Phantom Zone. It's a casual mention but felt like a big deal considering it's something that hasn't been mentioned before.

The second part in the Andy Diggle/Tony Daniel run continues with a great deal of action and suspense. Taking place one year ago from the current continuity, we get to see more of what defines Superman as well as Lex Luthor. I can't say I was a fan of his portrayal previously but now he seems back on track as the evil slimy guy we love to hate. We also get to see more on Shay Veritas, the mysterious woman first seen in SUPERMAN 13. If this wasn't enough, there's a back up story by Scott Lobdell and Philip Tan that starts a new story dealing with a younger Jor-El on Krypton. I wasn't completely crazy about the situation Superman has to deal with but the story still moves at a nice pace and the art is worth checking out. It's great seeing Superman done the right way. 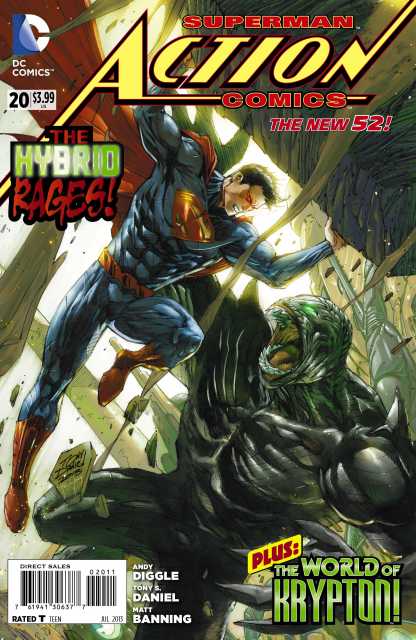