Find out more about what happened between Superman, Lois and Lex before the New 52 started.

I'm a sucker for seeing flashback stories set before the New 52 started. There's so much we don't fully know and a lot we've had to assume. Set "one year ago," the issue immediately begins with some great interactions between Clark and Lois. This is something that we've missed out on as Lois just received her promotion that removed her from actual field reporting. There has been a strong lacking in the display of any sort of connection between the two. Within just a few pages, Andy Diggle and Tony Daniel deliver. These pages tell us more about where they stand with each other than we've seen so far in all the New 52 issues.

It's always interesting when writers choose to give us narration from the character. It's a great way to break down the barriers and let us know exactly what's going on.

Tony Daniel does a great job on the art. I already mentioned the way he drew a scene with Lois and Clark. There's also the Superman scenes. We're talking the Man of Steel here. If he's going up against a gigantic threat, we expect big full action with loads of detail. While I do have a concern over the design and logistics of the threat (I'll address that below), the layouts Daniel uses is brilliant. Some of the action takes up most of the page with some other panels seemingly haphazardly thrown in, and I don't mean that in a bad way. The action gets intense and the way the panels are laid out conveys that frantic feeling. Daniel also draws a great Lex Luthor. I prefer this look compared to when we last saw him in earlier issues of this series.

A decision Superman makes about Lois is a little questionable. It makes sense to a certain degree but hard to say if it would actually be a huge concern. This could be another instance where we are not fully familiar with this version of Superman. It might be a matter of reminding ourselves that this Superman behaves differently in part to losing his adoptive parents at an earlier age.

The threat Superman has to fight almost seems like a bit too much. Superman faces some serious tech. Sure Lex is behind it but if we're talking a year ago in the New 52 Universe, it seems too advanced. I can't even imagine the cost of the tech. Perhaps we'll see more of an explanation as to the origin of it all later.

The solicit mentions Lex's scars but he doesn't have any here that I can see. Not like he did in Scott Lobdell's SUPERMAN. It'll be interesting to see how Lex's plan against Superman plays out. It does seem like a big step against him. If he could do this now, why wouldn't he be able to do it again?

Obviously there's something that could be said about the unfortunate fact that this new team of Diggle and Daniel will not be on the series for more than a few issues. The important thing is, this was the type of comic Superman deserves. We get some great interaction between Lois and Clark, amazing action scenes with Superman and Lex Luthor looking the like the cold and immensely cruel individual he's supposed to be. There are some tiny bumps in this issue but nothing to get hung up on. In a perfect world, we'd get to see Diggle and Daniel on ACTION COMICS for a long run. This is the kind of stuff that makes ACTION COMICS super. 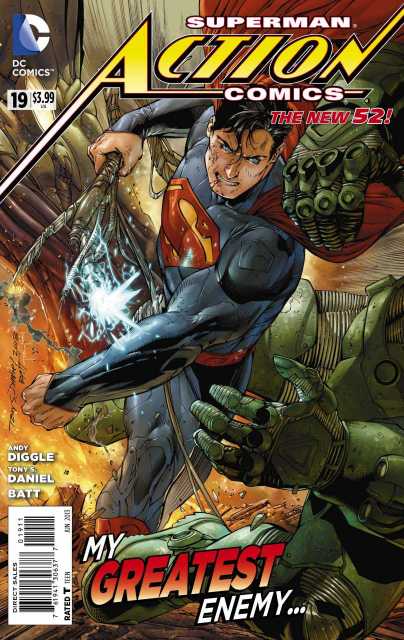