Whatever happened to Abe Sapien? The first issue of this new ongoing explores that very question.

I am a very big fan of Dark Horse comics and Mike Mignola's Hellboy universe, so I was definitely excited to pick up ABE SAPIEN #1, an all new ongoing series from Mignola and Scott Allie that focuses on one of my absolutely favorite HELLBOY supporting characters. As a fan of Abe Sapin's character, I was excited and had pretty high expectations for this issue. I am happy to say I was definitely not at all disappointed.

The story jumps around a bit at the start, but the introduction into the issue really draws readers in. The issue opens with an occult ceremony, and the mood quickly shifts. Readers are brought to B.P.R.D. headquarters to a round table discussion questioning how the repurcussions of that ceremony will be dealt with. The discussion then moves to Abe Sapien, a character that has been missing for a relatively long while. So what happened to Abe?

Mignola gives us a brief overview of certain events tied to Abe's story in the panels that follow, identifying the first moment when they saw "Abe apparently die," and how that death, or temporary moment of unconsciousness, led to his greater understandings about his own origins. It becomes clear pretty early on that this series might deal with the expiration of Abe's character and identity, which in itself is pretty interesting. So what happened to Abe? Is he really missing or does he simply not want to be found by the B.P.R.D.? Those questions are answered here in this issue.

The art is, of course, really lovely. The colors are somewhat demure, and most of the scenes featuring Abe have this sort of blueish-green wash to them which is kind of nice. It sets an interesting tone and reflects the mood of the character rather well.

Mignola presents readers with two stories: first the story of Abe and what he has been up to (or what the Bureau thinks he has been up to) and then also this new threat to the country, a series of monsters that have caused nothing but destruction in their path. The result is a great set up for a new series and a first issue that will very easily draw new readers in.

There are moments that are a bit confusing, like in the beginning of the series. Like I mentioned above, the book jumps around a little bit and Mignola doesn't really hold your hand when he walks readers through it, but that's not necessarily a bad thing. Even with the jumping around a bit, the story is easy to read and follow along.

I have definitely been waiting for a series focusing primarily on Abe's character, so this is something I really looked forward to reading. The good news is that the first issue definitely holds up and meets my expectations, so hopefully fans of the B.P.R.D. universe and Abe, specifically, will feel the same way. I loved the way Mignola pieced the story together by giving readers an adequate set-up. The story is organized well and will keep you engaged and interested in the story. It is definitely a fun read. If you are a new reader, there is not much you need to know about this issue going in: this is a great place to start reading if you are not familiar with this universe. 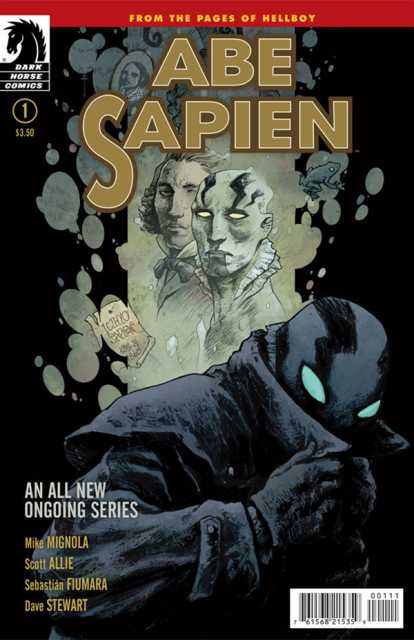