SECRET WARS has begun and it's time to visit the 'world' of A-Force.

With last week's SECRET WARS #2, we got a glimpse into the new Battleworld. It was an interesting look in how this new world is run as well as the person in charge of it all. The notion of separate regions run by different barons is fascinating. With A-FORCE, we get a closer look into the island region of Arcadia with the Baroness She-Hulk in charge.

To put it simply, this is a world where the female superheroes in the Marvel Universe protect the people. You'll immediately be reminded of just how many great female characters Marvel has in their house. Marguerite Bennett and G. Willow Wilson have created a fantastic world with the interactions feeling natural with a great heaping of fun built in. Although, you'll soon see it's not necessarily a world of fun and games as some serious business goes underway. Each region on Battleworld may have their own leaders and such but there is still the overall command they all must bow down to. Rather than have each world (and tie-in book) feel completely separate, there are things that connect them all, such as the Thors that patrol for the god-leader. In other words, there are consequences to not following the rules as we see in this issue.

The idea of a book mainly focusing on female heroes (there are male characters that exist) might feel like a gimmick to some. That's not the case in the execution of the issue. The way Wilson and Bennett present it here, it all just feels right. With us being immersed into the world and the lives of the heroines, you can't help but want to know and see more. The interactions we see are great and even before you finish the issue, you'll already be looking forward to the next.

Jorge Molina's art is superb here. Along with Laura Martin and Matt Milla's colors, this is a great looking book. It all adds to the 'wanting to see more' feeling. I found myself throughout the issue scanning the backgrounds, trying to take in every detail of this world that I could. The mix of action, emotion, and friendship between the characters is all wonderfully conveyed here.

Because of the nature of the story, we're basically thrown into this world. At first, it's not entirely clear what the 'hook' of the world is. We know from the cover and other information that it's a world of heroines. We don't know the specifics or even who gets along with who and if everyone is simply on one gigantic team. Basically, you'll want a little more information. It doesn't harm the story and you can easily dive into this world. You'll just have that little nagging scratch at the back of your head wondering what their history together is. But that's part of the fun with Battleworld and these different regions. We have the sense that they've existed like this for a long long time and we're just now jumping into the story.

This book was pretty much exactly what I wanted and hoped for. Too many times the female heroes in the Marvel Universe get overlooked. Marguerite Bennett and G. Willow Wilson have created a natural feeling world. It's easy to cry out that having just female heroes is a gimmick but it all simply works here. And it works in a great way. You'll find yourself wanting to know more of the region and the relationship and connections each character has with one another. There's just a wonderful vibe going on. Jorge Molina's art and Laura Martin and Matt Milla's colors add to that. With actual ties to the main SECRET WARS book, this doesn't feel like an isolated story done just for the heck of it. You get a sense that it is part of the bigger story. This is our chance to explore the specific region closely and you'll be glad you got the chance. I'm so ready for the next issue now. 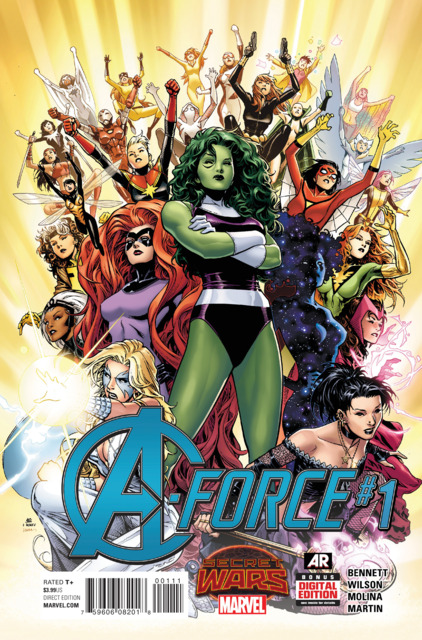