Because two guns wasn't enough, the boys are back and there's more trouble headed their way.

I'll admit, it wasn't until the movie for 2 GUNS got underway that I decided to read the comic. I've always read quite a bit of Boom! Studios' books but somehow I completely missed it. It was a fun read, just like the movie appears to be.

Of course with the movie about to hit, we'd get a comic book sequel. Is it just a marketing ploy? If so, who cares? 3 GUNS continues the story with Bobby and Marcus. Similar to the first volume, things aren't always what they appear to be. This does pick up shortly after 2 GUNS and the set up for a reunion is reason enough for the characters to be suspicious. There are some really nice twists and turns (especially at the end!). It's great having a comic like this in a genre other than the superhero one.

The art this time around is by Emilio Laiso. It did catch me off guard at first. Bobby looks a little different but some time has gone by so artistic freedom and all that. There is some great attention to detail. One minor scene in particular was when Bobby was at a bar and asked for a Coke. You might be aware bars have the soda dispenser thingies at the end of a nozzle and it was a nice little touch seeing this in a comic. It's the little things that show time and care is being used.

I love that Boom! got Rafael Albuquerque to do the covers once again!

Of course with this being the first issue, we don't have all the answers. Some things felt a little too convenient but it's for the sake of the story. And there's obviously a bigger picture, especially when you see the end. It'll make you scratch your head and wonder what Steven Grant will throw at us next issue.

You've probably heard about a little movie called 2 Guns with some up and coming actors hitting theaters this week (of course that's sarcasm). If you haven't already read the original, you should check it out either before or after you see the movie. 3 GUNS picks up after the events fro the first. You can easily get by without reading the first volume but it does enhance the fun if you're familiar with the characters. Steven Grant does a great job setting up these crazy situations with lots of twists. You'll definitely want to see what happens next. Emilio Laiso puts careful little details in the art that makes it great to look at as well. Chances are, you want to see 2 Guns in theaters. Then you're going to want to read 3 GUNS. I could see this easily selling out so get your butt to your local comic shop and buy a copy. 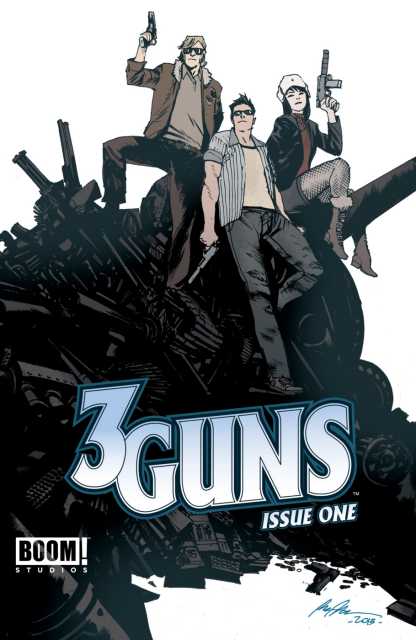