We take a trip to the future to see what might possibly be going on in the pages of Spider-Man.

Marvel has been unleashing special "100th Anniversary" specials. The idea is basically taking a look at what the series could possibly be in the near future. So while Spider-Man's 100th anniversary is still forty-eight years away, there's no doubting that the character will still be around in some form.

Sean Ryan has some fun with this idea and format. Let's just say, you will definitely want to read the brief recap on the very first page. We're coming into this story at the end. This is literally titled "Part 8 of 8." You have to look at this as you're diving into an ongoing story, most likely the same way you might've first started Spider-Man. There are some familiar characters here but we get to see some pretty big differences to mark the evolution of things over time. It's a trippy story with a Spider-Man story that sure does feel different from what we've seen yet still has the vibe and feel of what we'd expect.

In-Hyuk Lee's art is something to see. When you see the Venom suit in all it's glory or the massive fight on the streets of New York, you'll be pleasantly impressed. You get a nice feel over the ferocity of Venom in this incarnation.

It's a little hard getting into this issue with the idea of not knowing what happened before or really who exactly this Spider-Man is. It is Peter Parker. I don't mean it's someone else. We're just not fully sure where he's at in this period of his life. In some ways, we don't really see "Spider-Man" as it's more Peter Parker fighting "Venom." The way Venom is different is interesting but, again, makes you wonder what it means about the idea before this story.

The battle had a big feel to it but ends a little abruptly in order to give closure to the issue. There's also a little confusion, which could be due to the art layout for that page. In-Hyuk Lee's art is really good but a couple times some facial expressions were a little odd. There was also some mention of the technology at the time (how cars drive). It felt like it was unnecessarily being explained to us and Spider-Man when he should be more than aware how things work.

It's weird to think where Spider-Man might be when he reaches his 100th anniversary. We get an interesting story here set in this time period. While it's clearly Spider-Man (and a couple other characters), you can see how some things have changed or been rebooted given the future time period. The art is pretty amazing. The story is fascinating but given that this is just one issue and we're jumping in right at the end of an "eight part" story, you won't know exactly where everyone is and who knows if we'd ever see this time period revisited. Spider-Man, Venom, and Kingpin fans should pick to see the possibility but we can't say it's an absolutely crucial read. 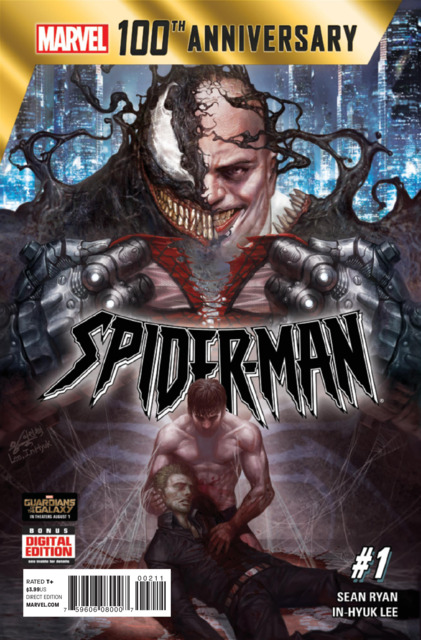