It's the return to the 100 BULLETS universe and you'll have to get ready for a brutal and bumpy ride.

100 BULLETS is back! Sort of. Fans of the original series will be happy to see the return of Lono as well as the original creative team. This is a mature rated comic and it is for good reason. Variety in comics is a great thing and simply put, this is a great comic.

For those that haven't read 100 BULLETS, there won't be any problem getting into this series. Taking place in Mexico, we catch up with Lono, last seen at the end of 100 BULLETS and he's managed to recover from what was a bad situation.

We get a look at the brutal nature of this dark world. It's bloody, violent and exactly what you'd expect from a 100 BULLETS comic. This gives us a taste of what we can expect. Lono isn't exactly the same man he was before but it's clear that man still exists.

Eduardo Risso's art is so great to see. Patricia Mulvihill's colors are superb. They capture Brian Azzarello's script perfectly and you'll almost want to read each page with a hand covering one eye in anticipation of what might pop up next. Azzarello definitely has rolled up his sleeves in preparation for the writing of this script.

The only bad thing is after reading this issue, you're already one-eighth of the way through this series.

I've often been a strong proponent for all-age comics. That doesn't mean that's all we want or need. This is a perfect example of what a Mature comic should be. There is plenty of gritty situations but it fits perfectly with the story and never comes across as gratuitous. The gang's all here in bringing us back to the 100 BULLETS universe yet you do not need to be well versed in the previous series. It's a perfect new-reader friendly story but will only be enhanced with the anticipation if you are familiar with Lono. If you're looking for something with an edgy gritty feel or have read Azzarello's 100 BULLETS, you will not want to miss this. 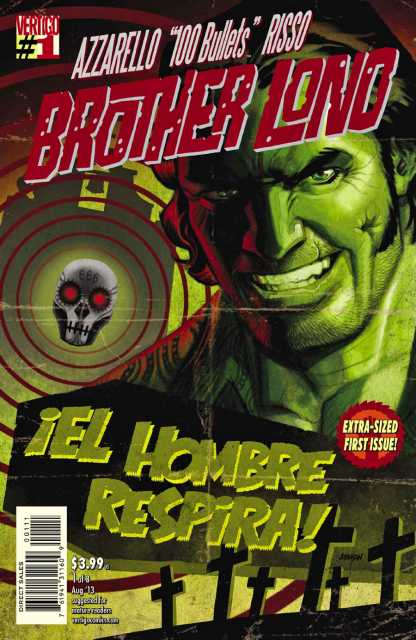