I'm really interested in this week's Red Hood and the Outlaws not so much because I want to see how the Joker arch concludes but because I've seen some very low scores on this issue from people who usually give RHATO high scores. I was not crazy about the last issue, but I did respect how Jason did not relent against the Joker, and I thought the labyrinth Joker set up for Red Hood was pretty menacing. Furthermore, Lobdell said months ago that Jason was going to hand Joker quite the beating in his cross over, and who doesn't want to see that? Is Red Hood and the Outlaws #16 getting an unfair reputation, or is this story a colossal misstep for a generally entertaining series?

In this issue, The Outlaws and the Teen Titans team up to stop a group of homeless people infected with Joker gas.

The Reason People Are Ticked

Well, I'm pretty sure I can guess why most people are disappointed. For the record, I never read other reviews before writing my own because I do not want to be copying the thoughts of others; however, lots of sites display a rating for comics right on the home page, so it is difficult not to catch that sort of information in passing. Anyway, I do not know why people view this as a bad issue, but I can make an educated guess. I'm going to reveal something that is technically a spoiler in the next paragraph, but I suggest that you go ahead and read the spoiler even if you have not read the issue because I think it will increase your enjoyment if you decide to read it for yourself.

(Spoiler) Jason is nowhere to be found in this issue. I take that back, he does appear on the cover, but beyond that, you shall see neither hide nor hair of Jason Todd. (though his red hood does make a mysterious appearance) Furthermore, Joker does not appear in this issue in any significant way. He keeps the Outlaws and Teen Titans busy with the Joker-bums, but other than the last page, the Clown Prince of Crime is absent. I can see how this annoys people, and I have to admit I feel the burn a bit myself. Red Hood vs. Joker was plainly advertised; we should get what was promised.

Perhaps the Teen Titans issue will focus solely on a Red Hood team up with Red Robin. That would somewhat soothe this burn.

Apart from All That

So ignoring the...questionable call Lobdell made with this issue, how does the rest of the story fair? Sadly, there are still some noteworthy problems. This issue, which already feels a bit off by ignoring a crucial element of the story, spends two pages introducing two separate potential new villains. The first of these villains is astoundingly underpowered to take on the Outlaws and the second has already been committed to several other near future appearances, so he must have a very full docket over the next several months.

The plot devices for moving forward the story are also suspect at best. Pulling a play from Batman's playbook, Arsenal has a computerized “analysis arrow” which takes a blood sample from its victim and then relays the info to an Arrow computer and marks the location on the HUD map. After that, it is a simple matter for the Titans and Starfire to follow their leader and reach the way point, hold X to grab the chemicals, and then escort the flag back to base. All of that to say, its a bit convenient as exposition goes.

(Spoiler) I'm also a little confused why a character whose only power is to build walls needs to be told that building a wall would be helpful. I mean, seriously, if Bunker has just blocked up the building entrance in the first place, the conflict would have never happened. Everybody on the Teen Titans seems to either be completely incompetent or a compete dick.

Arsenal might be getting his own tale soon in DC Presents, but this serves as a nice warm up for him since Roy was the main player in this issue. Consequently, your enjoyment of this issue will probably hinge on how you feel about the character. Personally, I like his flippant charm and self-deprecating humor, but at the same time, his monologue and dialogue took what was expected to be a serious issue and turned it into a fish-out-of-water comedy. There are lots of lines which are funny, but for me, they all landed kind of weak because of the insincerity of the humor. These teams are facing a serious situation, the Titans are scared, and both teams are facing the real possibility that their leaders and friends are dead, yet they keep making jokes. I don't mind the Outlaws ,who are more experienced, making jokes when they think they will live to tell the tale, but for characters who believe they are on the brink of tragedy, humor does not make sense.

Still, there are some funny lines. Lobdell makes an inside joke about Arsenal's old codename, Speedy. Roy also mocks the Teen Titans names which is fully deserved with most of them. Kid Flash: “The name is Kid Flash.” Arsenal: “Oh. I was hoping you were kidding about that.” My feelings exactly, Roy. Solstice's plea for the Teen Titans to listen to Arsenal also tickled me. “Anyone who has lived this long fighting with just a bow and arrow...must have something going on.” Very true.

The story takes time to delve back into Roy's detoxing days with Killer Croc. As interesting as I find this back story, it has absolutely no relevance with the rest of the issue and felt extremely out of place.

I actually have a few more things I could mention, but I'm tired of belaboring on it, and I've hit all the most salient points. At the end of the day, this story is okay...maybe even good as an Arsenal or team up story, but I don't think anybody who bought this story expected to have a complete absence of the leading character. I can see how the creative team might have thought it would be better to tell the team story here and tell the duo story in Teen Titans, but we don't even know if that is what Teen Titans will deliver. Regardless, it feels like false advertising for this issue, and it impossible not to feel at least a little disappointed. I wouldn't recommend picking up this issue unless you've already shelled out the dough for the previous Teen Titans or RHATO Death of the Family issues.

Red Hood and the Outlaws #16

Legends of the Dark Knight #34

Other reviews for Red Hood and the Outlaws #16 - Family Matters

This has been a very good series, and I have really enjoyed it, but this issue is disappointing. Scott Lobdell has done a brilliant job making this series very fun, but there have been a few imperfections along the way, and a few disappointments.PlotThis issue sees Arsenal (Roy Harper) lead the Teen Titans, along with his fellow Outlaw, Starfire in rescuing all the people infected with Joker Venom. The only problem is that certain members of the Teen Titans aren't overly fond of having Arsenal b...

Family Matters. This Issue...Not So Much. 0

Red Hood and the Outlaws #16 - (Death of the Family Tie-In)Released: Wednesday, January 23rdWritten by: Scott LobdellArt by: Timothy Green IICover by: Tyler KirkhamThe previous issue of RHatO proved that tying into Scott Snyder's massive Death of the Family story was possible without losing the integrity of the book. Focusing primarily on Jason and his confrontation with the psycho who killed him, the book featured a bit of comic relief with Roy and Kori and set up a potentially good follow-up. ... 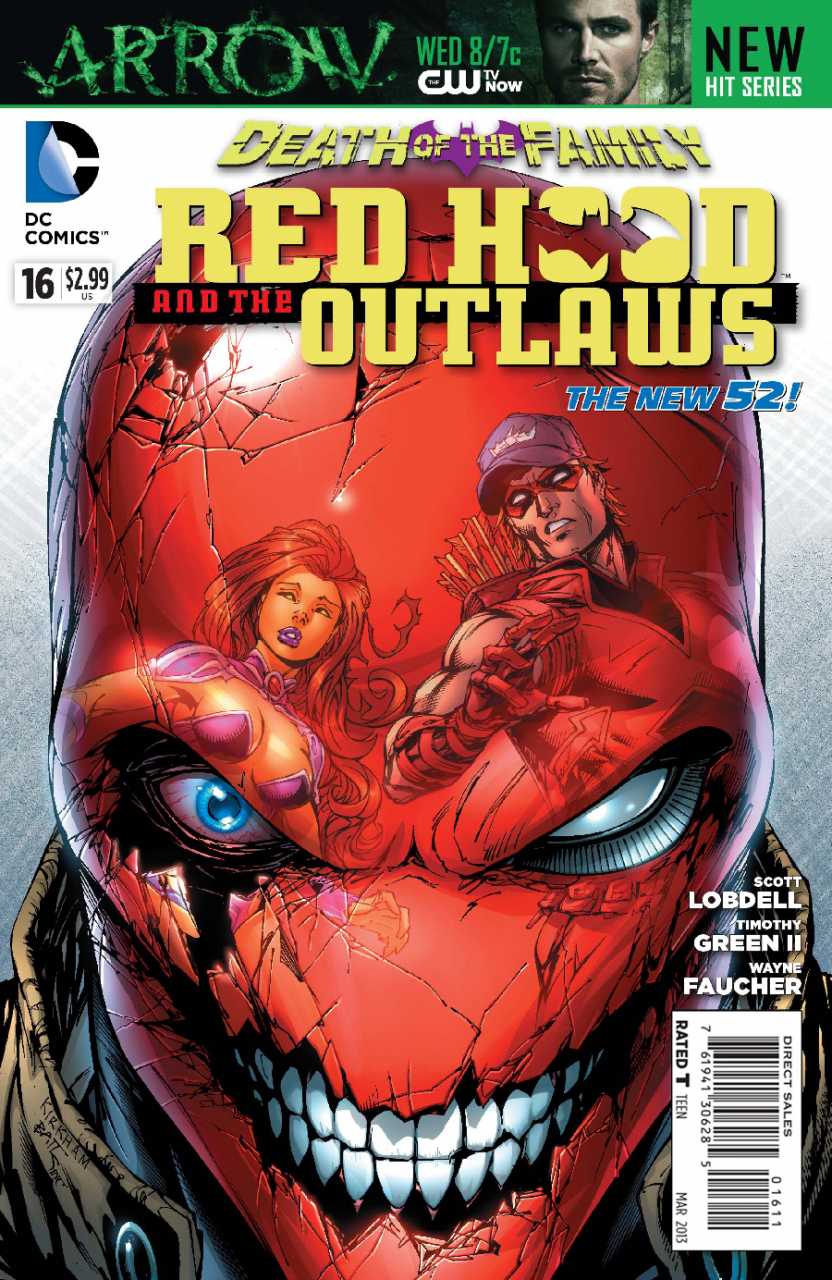