This has been a brilliant series, and has continued Greg Rucka's run on Punisher brilliantly. Although I personally hoped for something different in this series it has still been very good, and I will be upset to see Ruck leave Punisher.

This issue sees the Avengers expecting a break out attempt from Punisher during Rachel Alves trial.

This was a very good issue, but it was slightly slow, and the worst of the mini-series so far. I was expecting a lot of action in the last two issues of this series, and to be honest this issue slightly disappointed with that. I wanted to love this issue as much as the others, but I couldn't quite. Ruck did however still do a very good job, and I've liked how he's used the Avengers throughout this series. I do however hope that he does a much better job on the final issue, as despite doing a good job this issue, I know that he can do a perfect job on the final issue, if he wants to.

Once again I liked Carmine Di Giandomenico art. I'd never really liked his art prior to this series, and although I'd still prefer Marco Checchetto doing the artwork, Di Giandomenico has been phenomenally brilliant. He draws all the characters amazingly, and although some are better than others, it's still great. I also think that he's laid out the art brilliantly, as it looks perfect, and wouldn't look as good any other way. I also have to give a lot of credit to Matt Hollingsworth, as his colours have been brilliant, and has really brought an amazing tone to the series, making it feel very dynamic.

The main reason I like this issue less than the previous issues is that it's a bit slow, and spends too much time setting things up. I liked that the Avengers thought through Punisher's possible actions, and especially that Black Widow knew that they won't know what he's going to do until he does it. I think that this took up too much of the issue, and that it could have taken more time on during the final sequence.

The thing I liked most about this issue was that Punisher showed that he was back in New York, and that criminals weren't safe. I also liked that he used this in a bigger picture to help his future plans, and that he'd planed his actions precisely, just like you'd expect from Punisher.

I also liked that Wolverine was involved in this issue, and hope he makes an appearance in the final issue. I liked the conversation between Wolverine and Captain America, and that it was still questionable to what side Wolverine was on. Although this wasn't a long sequence it still reminded me that there are lots of different perceptions of Punisher's actions, and that none are fully wrong. Like Wolverine's perception that killing certain criminals is a worthy cause as it could save innocent lives is just, whereas Captain America is also right when he says that killing people whether criminals or innocent is never right.

The action sequence at the end was also a brilliant sequence, and by far the best in the issue. It was well thought out, and I really liked the twist in the conclusion. I won't spoil the ending but it was very good. I still think however that they could have spent a bit more time on this, as it felt a bit sudden, and could have been much more dramatic.

Overall this was a brilliant issue, but more of a set-up towards the final issue. I'd still recommend this issue, as although being slightly slow it is still very good. I would also recommend this issue to newer readers but only if you get the remainder of the series.

Other reviews for Punisher: War Zone #4

In this issue Rucka continues to prove his skills as a writer that can simultaneously explain parallel stories, since he optimized the pace of this issue by showing the Avenger's concerns of what Castle would do next and, at the same time, showing Castle getting back to New York to make his move. Was it great to see Castle fooling all the Avengers? Hell yeah, that was memorable, few non powered characters were able to do that in the past so this was a great achievement, in my opinion. for Castle... 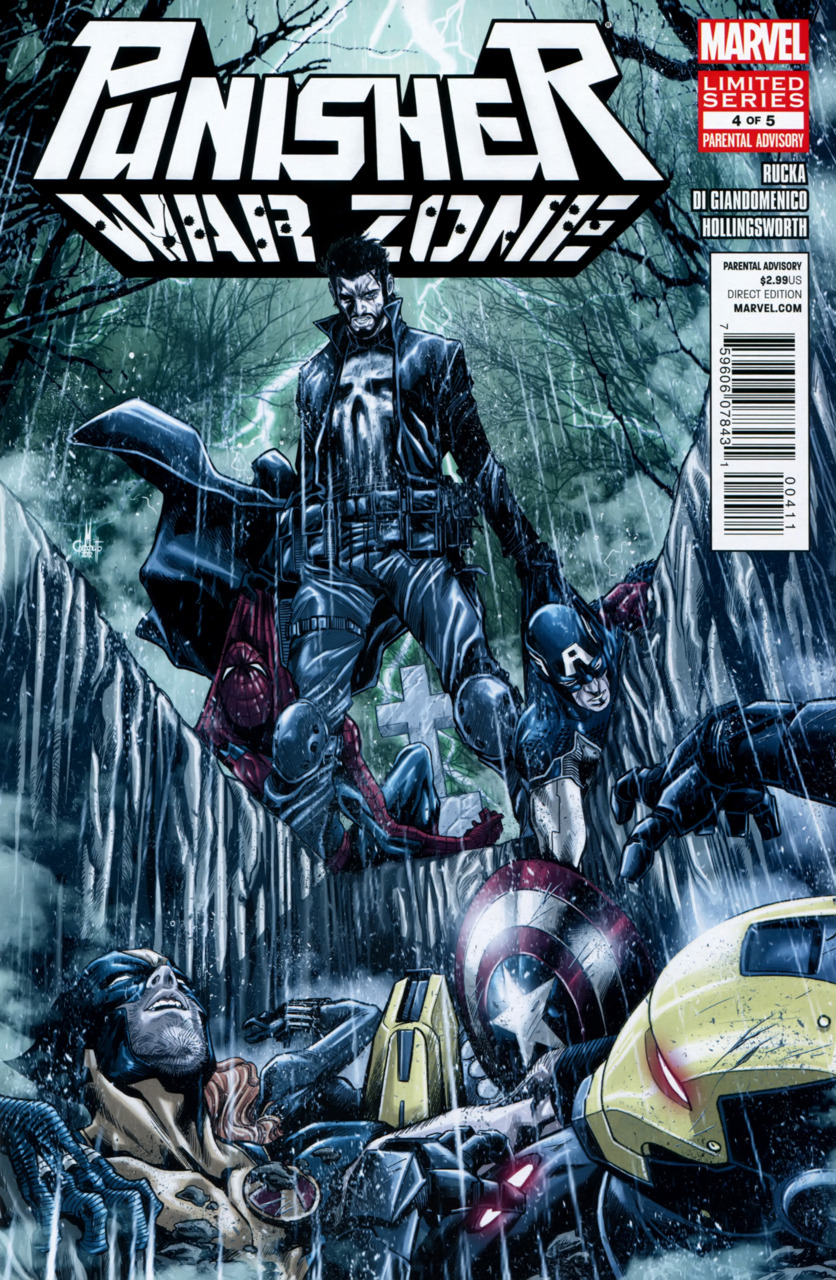