Thor Shall Have Words with the Punisher

This has been a brilliant mini-series so far, and a more than fitting way to end Greg Rucka's run on Punisher. Greg Rucka's work on the Punisher over the last year, and a bit has been phenomenal, and I'm among the many who are sad to see his run come to an end, especially considering the circumstances.

This issue sees the God of Thunder Thor in search of Punisher. Punisher won't make this easy for Thor, and has a few things up his sleeves.

Another fabulous issue, and Rucka has done a brilliant job putting Thor against the Punisher. I love how he wrote both characters, and how he made it a cat and mouse chase, making it obvious that Punisher couldn't defeat Thor, whilst giving him hope. The only thing that has slightly annoyed me over this mini-series has been that they've been stand alone issues, and although this isn't a bad idea, I personally would have preferred a huge build up, with it showing Punisher, and the Avengers as pure enemies, but there's still a couple of issues in the series to do that. Although I say that I'd prefer a clear line in the sand between the Avengers, and Punisher, I do understand that the Avengers won't see Punisher as a bad guy, just an insane guy, with bad motives. This has however only been a small thing that's annoyed me, and I've overall loved the series, and this issue in particular. With all these big names involved over this mini-series it's easy to make a mistake, and I think Rucka has handled it well, and although I don't necessarily like it 100%, featuring one main Avenger in each issue was probably the best way to use these big names, and not ruin them.

The art was once again phenomenal, and I'm starting to like Carmine Di Giandomenico more, and more each issue. As I've probably said in the past I didn't like Di Giandomenicio's art prior to this, and especially disliked it on Journey Into Mystery, but so far on this series it has amazed me, showing that he has a lot of talent. I would however still have preferred Marco Checchetto working on this series, as I love his art even more, but I doubt there would be any artist I'd prefer on the Punisher over Checchetto, as he's really made Rucka's run outstanding. Although I disliked Di Giandomenicio's art on JIM, a Thor series, his interpretation of Thor on this issue was much better, and although still not perfect it was much better. Di Giandomenicio's art on the action sequences throughout this series has also been brilliant, and really nice to look at, giving the perfect Punisher action feel to the issue.

When I heard that Thor would be the next person to face the Punisher I wasn't too sure how it play out, and felt that Punisher would be at a major disadvantage. It wasn't however as easy as you'd have thought for Thor to find Punisher, as despite Thor's being the God of Thunder, Punisher is a very resourceful person, and should never be counted out, no matter what the situation. It was also very interesting seeing how the locals reacted to Thor, and how Thor managed to get information out of them.

What was more impressive was how Punisher reacted to Thor's presence, and how he used Thor's presence to his advantage, using him as, "bait," (as Thor put it). I also loved how this lead into a chase between Thor, and Punisher, and especially how this played even more into Punisher's favour. The fast pace of this won't however be to everyone's liking, and if you are a quick reader who mainly reads the text, with the art being a bonus, I'd advice slowing down on this issue, as it's easy to miss things, and the experience is much more enjoyable that way (I personally had to look back over a few pages as I read one part too quickly). Although this was a fast paced sequence it was however very well handled, as it felt like a big action/shoot-out scene from an action film like Expendables, and suited the tone of this issue brilliantly.

I usually try to avoid spoilers, but it would be hard to talk about my favourite point in this issue without spoiling it. I will however still try and spoil as little as possible. Later in the issue Thor and Punisher sit down to have a beer, and they have a discussion over Punisher's methods. It's always brilliant seeing Thor sitting down with a beer, and a sight we don't see as often as we should, especially in recent years (although it is featured in Thor: God of Thunder). This showed how Thor felt about the Punisher situation, and I felt it was very true to his character. The main thing I loved about this sequence was that Punisher began to question himself at the end of the conversation. I will be looking forward to seeing how this affects the next issue, if it does at all, and what Avengers will feature.

This was another brilliant issue, and although I will be sad to see Rucka's run come to an end I can't wait till the next, and penultimate issue comes out. I would highly recommend this issue, the entire mini-series so far, and all of Rucka's run.

Other reviews for Punisher: War Zone #3

After Castle fooling Black Widow in last issue events, it's Thor's time to try and arrest the Punisher. Now there's a concept that could ruined this story if Rucka decided to go for Thor really chasing and bringing down Castle, since he wouldn't have a chance against the Thunder God, but instead, the writer plotted a different aproach (what seemed a little odd at first, but then sounded really reasonable): Thor tracks down Castle in the Asian jungle, perhaps the worst part of this issue, since t...

Starting to Come Together 0

I love the Punisher. I honestly think Greg Rucka's run on this book has become the definitive run. Instead of continuing on and closing it out, we get an epilogue of the series in mini-series form. It features Frank Castle vs The Avengers...but not really.That's how it's marketed, and it is marketed wrong. It's really not a dumb action book.Issue one was set up, issue two we had Frank vs Black Widow, and it wasn't a fight. This put some off, but you will see why that happened.The Punisher actual... 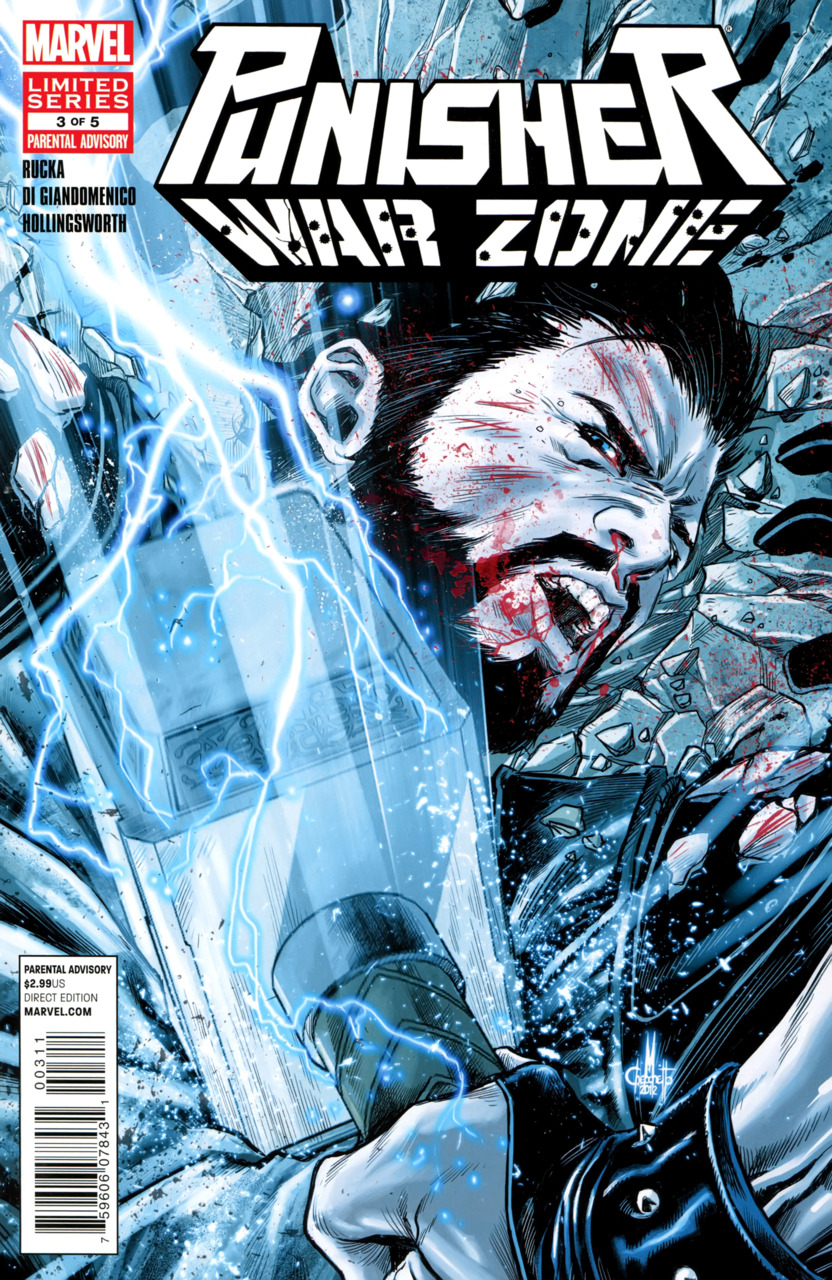