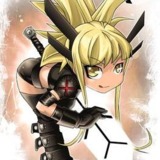 @sonny6killer: Both of them are, obviously. In the end though they're giving us what we want, so I'm not complaining.

I'm excited for Lando, and glad they didn't go the obvious route by doing a Han book.

Yeah great one of the best writers in Comics ist tackling the most creatively bankrupt property in Human History. I am enthralled

I'd be more interested in some novels, but I'll definitely be picking this up.

...but we're getting plenty of those as well. Plus, y'know, this is a comic book website after all. Just saiyan.

Wait, this is a comic book website?! No wai!

I'd be more interested in some novels, but I'll definitely be picking this up.

A sad day for all of us. You will be missed, sir.

Yu Yu Hakusho - Used power-ups very nicely and never abused them with different forms, evolutions or whatever. He had two major ones, with each adding on to the story in some way - the most notable being his makai transformation.

He had a pretty small story compared to most of the shonens for starters.. and how is having different forms 'abusing power ups'?

One Piece - Though I know it isn't as good an example as the other two, you hardly get training montages and the power boost make sense in the manga. For example, Haki was a natural progression for the story whereas boost like Kyuubi mode were largely superfluous.

Well, yeah. They get power ups without any sense. That makes things worse, if you haven't noticed. Luffy's way of ending fights is 'scream louder and punch harder'..

like who? Most anime have a lot of female characters that are central to the story and totally not there for just fanservice.

Can't type that without laughing.

Even worse, when a female character starts out pretty powerful and cool, then become "damsels in distress", afterwards becoming weak side characters.

Looking at you, Rukia.

Love it, worth every dollar. It feels very cinematic in a way, and the hardcover is very nice. Not glossy pages, but in a way that's better since I don't leave any fingerprints. Scripts and sketches in the back as well, definitely like those.

The whole teenager thing. Why is it that our hero that's going to save the day from an earth-shattering crisis has to be a high schooler? There are lots of exceptions, sure, but there is a vast overrepresentation of that age group. What's even more awkward is when these characters are sexualized. It's just creepy, 20's-something guys.

No, I'am not considering enlisting, I made this thread to here people's opinions and arguments, but I have no emotional investment, just casual interest.

That's cool. If you want to get some more in-depth information here are some charts.

I've dated females in the military, it's a mixed bag. Some woman can do better than men on the PT test and some would never be able too.

True enough. A large number of males are complete pieces of crap, but are still in. What's your point?

They just shouldn't let women be in the military.

True American values right there. Let's just not allow non-whites or non-Christians while we're at it.

I had a discussion recently with a friend who was going into the military, and he described to me the physical trials necessary to get into the program. Specifically he said how women do not have to be faster in the time trials and didn't have to do full-body push-ups. This got me thinking if this was a double standard, and I wonder what people here think of it.

Personally I think they should lower the male entry requirements, seeing as the level of physicality they needed previously may not actually be needed, if the women's trials are any indication. Or they should find the minimum physicality that they will accept and have everyone apply equally.

I'm curious, why do you care about the military's requirements? Considering enlistment yourself?

I ask because a lot of people have opinions about our requirements, but have very little actual knowledge about how it works. In the Air Force at least there aren't really "trials for getting in". There are annual or bi-annual fitness tests depending on how you scored previously. Yes, there is a test in Basic Training, but that's something they spend weeks getting you conditioned for.

Females are required to do normal push-ups, no differently than males. The only difference is that, yes, there is a smaller threshold for the amount of push-ups, sit-ups, and the run time, the last of which is a joke.

People bring up gender in the whole combat role discussion, but what about age? If someone is at a certain age should they be ineligible? I'd think that a specialized fitness test for those roles, with no differences based on gender or age, would suffice. I'd design it so it wouldn't have things like push-ups or running on a track on it, because honestly in a life or death situation who cares how fast you can run in a circle? There would be things like a ruck march to test if you can carry standard gear for a set distance. I'm sure these specialist units already do things like this, which makes me wonder why civilians care so much about it, because I'm in the service and I don't...

As someone who works in an office, the way our test is could be better, but it's not such a big deal. As someone who is in her late twenties it is irritating that I have to test at the same level as someone who is 17, because I sure don't have the same energy levels as I used to, but I just have to suck it up for a few more years. I don't think that standards need to be raised though, like silkyballfro94 said. We don't all get shot at for a living, in fact most of us never will see combat. For those of us who will, sure, they'll do their thing with standards. If anything support jobs like my own should increase standards for intelligence, social skills, and integrity, three things that people seem to discount all too often while overemphasizing physical ability.