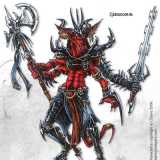 My robot lol or mech

Power Source:Energy splicers multiplying energy cells but it takes a long time to make just two new cells but can convert energy to another source

Original Dig Location:Distant planet just blown up from war Weapons:Due to alien technology almost all types of weapons could be made melee types to energy guns, to scanners, to regular guns however it uses his power source and the enregy getst taken away from him so certain weapons can't be used to much or more then twice.

Equipment: He can make a blue energy sword from one of his many blue spots

Movement:Due to the way he was made it is actually quite easy for his mobility making him faster then some other robots.

Weaknesses: All weapons he makes takes energy from him and certain types of weapons take more the others melees however don't take any energy guns and regular machine guns however take up his energy rather then most that would have their own packs. How ever he could however get a solar absorber if he wished to build up some lost energy.