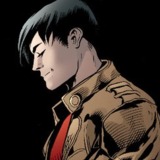 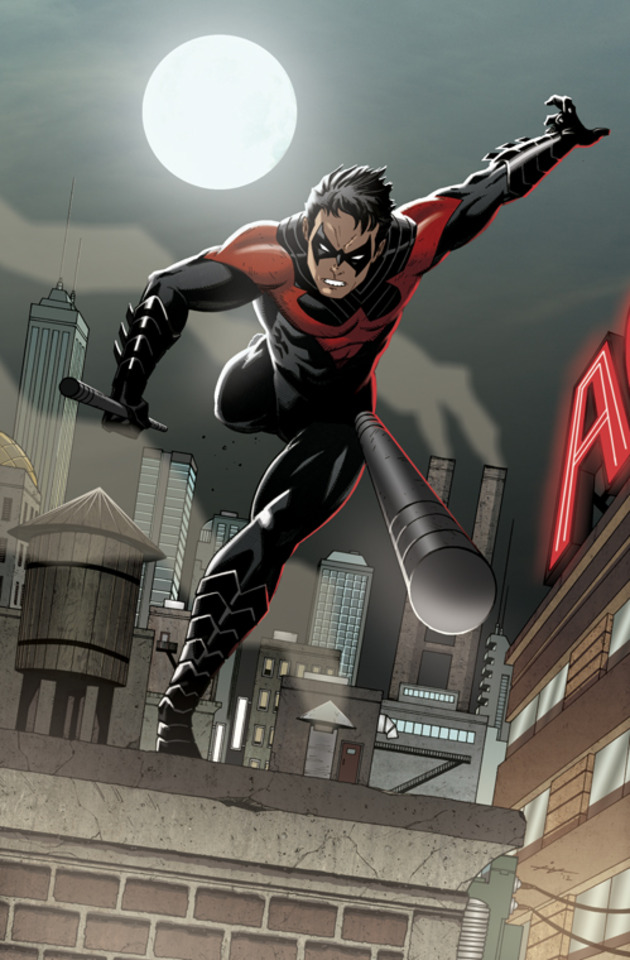 Family: Was taken under the wing of Quintus Knightfall

Short bio: During the genocidal tragedy when Charlemagne Lebeau seemingly murdered all of the Arashikages, Zain's parents were slain by the mans deceptive hand. The boy spent the rest of his young life in Gothic without anybody, no family, no friends, all alone. Once Mercy sought to resurrect to Arashikage clan, she found and brought the young Arashikage to the Agiad'coda island, spending time there, he was taken under the wing of Quintus Knightfall who taught him to fight, Zain then traveled back to Gothic to live his life in the shadows, hoping to one day find purpose. After, Zain was trained by the The Orochi clan. Time passed, and Zain found himself back in Gothic, however, he was captured by Anthony Stark who forced him to reveal the location of Agiad'coda island and the existence of Mercy's daughter, Catriona, hating this, the boy was latter found by Brainchild, the two had fun, and got to know each other, before she brought him to Quintus' new home, Black Eden Estate.

A young, yet prodigious martial artist, Zain boasts himself as small, yet deadly, having been trained by some of the worlds most skilled and experienced martial artists, such as the great Quintus Knightfall, the infamous Gothic Knight, and numerous Arashikages who are residents on Agiad'coda island, further refining his skill, Zain sought out tutelage under the Orochi Clan, rising up through the ranks and being gifted his own ninja's in recognition of his skill. The Young Arashikage's fighting capacities are significantly boosted his ability to learn anything five times faster than usual, whilst his neurological pathways are five times stronger, meaning not only can he learn a skill quicker than an average human, but he can learn it better, and without faults. He continually strives to learn new skill and improves skills, and thus far, employs a very quick, nimble fighting style which emphasizes agility over power, and misdirection over anything, this is perhaps his most elusive skill, the ability to outwit his opponent via bodily contortion and unequaled athleticism.

Inhuman durability: Zain's predominant mutant ability lies within the realm of inhuman durability and endurance, even going beyond those who have advanced healing factors. His skin alone is as durable as thick leather hide and is able to endure even the strongest punches and has even been documented to resist slashes when attacked by blunt knives, whereas normal skin would still sustain a wound. All bones found throughout his body are also considerably tougher and denser than the standard human, able to take blunt trauma and sustain weight which would cripple anybody else. His muscles are also tougher and can act as absorption against blunt force. Normal human punches barely phase him. Being stabbed by a standard knife may only barely penetrate - However; he is still susceptible to gunshots.

Exceptional endurance: His inhuman endurance levels are what fuels his intimate desire to fully tap into his genetically gifted potential (being his X-Gene) knowing he has the capacity to one day be one of the words foremost and relentless crime fighters able to sustain his maximum physical exertion levels for over three days without tiring. His body is ultra-effective at energy conservation and energy replenishment. If he somehow does run out of energy, he would soon be back to full energy levels in under 30 minutes, able to once again, sustain three days worth of crime fighting to his fullest extent. This also means he has a slight healing factor, negligible in actual battle, but he recovers around three times faster than the standard human. But midst a battle, it does not really play to his advantage.

Enhanced muscular motor unit recruitment: Motor unit recruitment is the activation of a muscle by repetitive recruitment of motor units to activate muscle fibers when required to move an object or exert physical force. When a motor neuron is activated, all of the muscle fibers triggered by the motor neuron are stimulated and contract, lifting a dumbbell for example would require a specific amount of muscle fibers to be recruited to lift the item. The activation of one motor neuron will result in a weak muscle contraction whereas the activation of multiple motor neurons will result in more muscle fibers being activated and creating a stronger muscle contraction. Most people only recruit around 30% of their muscle fibers when contraction takes place, even the strongest weightlifter does not recruit anywhere near all of them. Zain is able to recruit 100% of his muscle fibers 100% of the time, meaning his muscular endurance and strength is exponentially heightened in effectiveness.This lends to him being able to perform feats which would make the strongest and most skilled Olympic powerlifter look like a baby, able to outrun the best sprinter, his acrobatic prowess is unparalleled within most of the meta-human community. Due to this, Zain is able (at standard) to lift 5 tons without much effort exerted, at his peak, 10 tons. This ability also allows him to run at speeds over 200 miles per hour.

Enhanced "Muscle Memory": When any movement is repeated over time, be it playing a piano or punching a punching bag, a long-term muscle memory (or pathway) is created within the brain allowing the body to perform such action again, through repeated exposure to such movement, the neurological pathways are able to recruit the required muscle fibers and eventually, allow the movement to be performed without conscious effort. This process decreases the need for attention and creates maximum efficiency with less energy expenditure within the bodily system. Zain's body is able to create considerably stronger neurological pathways within his brain allowing Zain to pick up and learn skills far faster than normal. This ability also allows Zain to have a far greater memory than most, able to learn new things around five times faster than the average man, for example, he could learn a new language ridiculously fast or master a martial art far quicker, and to a better degree than a standard human.

The Orochi clan sword training: Expertly trained by the Orochi Clan in the vehement art of Japanese swordsmanship, specifically trained with his personally gifted Orochi blade. Through weeks of tirelessly taxing training with an Orochi woman named "Siren", Zain was taught how to exploit an opponents visible and not so visible weaknesses as well as how to maintain patience during battle and wait for the perfect time to strike, utilizing perfectly executed explosive attacks while being taught evasive maneuvers against even the most skilled and potent attacker. Due to his mutant abilities meaning he can learn faster and better than the average human, the Lost Arashikage adjusted to using a blade uncannily fast, it was ingrained into his fine motor control as though one would be tying their shoelace.

Lucid Dreaming: During sleep, the brain produces a specific chemical which halts movement and renders your body paralyzed as to avert you moving around (due to dreaming) and hurting yourself. During sleep however, your brain still creates new neurological pathways or even strengths existing pathways (hence the paralysis, if you were able to move, one would punch the air, or fall off of the bed during sleep). Most humans however, are unable to tap into this to do anything productive. During sleep Zain is able to freely enter a lucid state, recreate himself Gothic, and fight crime, normally learning a Martial Art for example during sleep and relying on that to improve your skills would be fruitless (due to the limitations of a dreaming state not actually mirroring real world physics, meaning your body would not interact the same in a dream state, compare real life) but Zain's mind compensates, and can perfectly recreate the landscape in a dream, meaning he can practice during sleep. Due to the time differences, an hour in real life may seem like an entire day during a dreaming state, for his age, Zain has the actual combat experience of a 25 year old.

Outlawed Arashikage Blood Bending: Due to being an ancient descendant of the Arashikage clan thus sharing the same biological traits, Zain is able to perform the unorthodox and outlawed Blood Bending technique crafted by the Arashikage clan. Although it was outlawed, Zain discovered his ability by mistake within Gothic in his youth, accidentally killing a cat while trying to mimic a telekinetic user, thinking he had telekinesis, Zain tried to move other things, but was unable. Soon after, he started to move around insects and other creatures with blood inside, after weeks of practicing, Zain realized he could bend the liquid within a living organism. Having religiously self taught himself this technique on various wild animals and increased his knowledge on the human anatomy to be able to take full advantage of the technique and how to use it to his advantage in the most unorthodox, crude manner. During this stage of learning, Zain was found by Mercy and brought to the Agiad'coda island, further refining his skills and at an incredibly young age, nearly mastering the esoteric art of Blood Bending...Some say, his long deceased parents were master Blood Benders themselves, hence Zain picking it up abnormally fast.

The outlawed form and style used by a Blood-benders mirrors the movements of a marinate who dictates his puppets maneuvers with intimidating and eerie hand gestures shaping and his opponents body with violent contortions in which the opponents own body fluids are highlighted and manipulated against their host to cause fatal or near-fatal harm. Its teaching was forbidden due to its extensively evil foundation and focus on unmitigated lack of moral sensibility. With this abolished technique Zain can cook, freeze, extract, or pressurize any and all liquids inside his opponent, even quelling ones internal organs or cause them to dangerously rupture. The Red Renegade is not limited to merely targeting his opponents blood; he is able to target any internal fluids which inhabit the body of an opponent. Although the main focus when using Blood Bending is for offensive purposes, Zain is able to strangely utilize the occult art and actually develop healing abilities, through intrinsically gifted prowess combined with his deep sighted knowledge of the human anatomy and biology, enabling him a variety of healing methods. He is able to prevent blood loss from sustained wounds during battle, avert blood clots, prevent cardiac arrest by manually controlling his own blood flow and generally being able to accelerate his bodily healing processes.