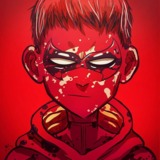 @nima_: I'll have to get to this sometime soon in the future. School's started back up for me so it'll be a bit.

4chan curbstomps all other sites if we're talking about sabotaging and messing with the other websites. They have way more experience with stuff like this and have even done it many times.

Bored so why not.

@sirfizzwhizz: Nah it's not related to the video games. This guy is the one I'm referring too. Damian Wayne actually doesn't have that much PIS. But yeah they're all pretty good characters and they're pretty fun to debate. Golgo 13 is pretty much an insane marksman sniper that pulls off shots that would put even Deadshot and Bullseye to shame.

In Episode 7 in his self-titled anime he was able to precisely snipe the g-string of a violin without harming the player or the violin itself to make it seem as if the string broke by itself.

And in Episode 19 he was able to snipe two people despite them being not only extremely far away but protected inside a glass fortress specifically designed to be impenetrable and with no chance of any sniper shots being made.

Description of the glass fortress:

Here's Golgo 13 pulling off the ricochet shot from the pool a great distance away with ease. Both were headshots too.

He's got a quick-draw speed or 0.04 seconds too. So he's not just accurate but incredibly fast.

@sirfizzwhizz: I'd be down for that sometime yeah. Sounds good.

@sirfizzwhizz: Nah it's not related to the video games. This guy is the one I'm referring too. Damian Wayne actually doesn't have that much PIS. But yeah they're all pretty good characters and they're pretty fun to debate. Golgo 13 is pretty much an insane marksman sniper that pulls off shots that would put even Deadshot and Bullseye to shame.

When you get a chance, love to do a Dooguy vs Nobel Kale, or Master Chief battle.

Maybe sometime in the future but I've lost my folder of Halo feats a long time ago so I'd have to re-collect and refresh my memory. I haven't invested in the Halo universe in a while actually.

I have an array of newer street levelers that I'm feat collecting that I can use though, including Damian Wayne, Garth Ennis' Hitman, Golgo 13, Punisher, The Goon, and soon Judge Dredd.

When you get a chance, love to do a Dooguy vs Nobel Kale, or Master Chief battle.

Maybe sometime in the future but I've lost my folder of Halo feats a long time ago so I'd have to re-collect and refresh my memory. I haven't invested in the Halo universe in a while actually.

Dude you're the one thats absolutely ridiculous if you can't take an obvious joke.

Ontopic: I've already stated in another thread that Ironfist would beat Jason regardless of venom/all-blades, etc. Ironfist is basically a god for a street leveler. And most top tier peak humans don't stand a chance against him.

Off topic: You really overrate the Marvel characters with healing factors.

Well I can't tell it was a joke considering you high ball Jason a lot. It wasn't obvious at all. I've seen many unironic comments from you regarding Red Hood that are on a similar level. Forgive me if I'm not in every single thread you're in. I don't know why you expected me to know what you said in another thread.

I don't overrated characters with healing factors, they simply have a very impressive set of advantages. They have almost no issues with fatigue, can recover from most injuries other street-levelers can dish out, and also usually have low-level enhancements because of their healing factors.

Beating Deadpool isn't that impressive, he has more low showings then high. Currently he gets put down by single vital gunshots, reacts slower then old man Steve Rogers, and gets dropped with low amounts of electricity.

Most of his low showings are when he is not taking a fight seriously or written under Daniel Way or other writers who don't know how to write him properly and misinterpret him as someone who takes everything as a joke, when that's not Wade at all. And I'd still disagree with him having more low showings than high. I've posted many feats that span across multiple writers and story arcs (Joe Kelly, Duggan, Fabian Nicieza, etc.) throughout the years with some feats from a mere week before to a decade old. Whether it was him stalemating Killmonger enhanced who has defeated Black Panther in close quarters unamped before in the 90's or him fighting Sabretooth literally in the current run he has right now.

If Wade has been downed by a single vital gunshot, it's either a specific situation or inconsistent. I can post an entire list of times Wade has fought with vital organ damage to extreme degrees. He's had his entire stomach crushed, had an arrow in his head, an entire assault rifle clip shot into his chest, and a horn shoved through him to the point where his guts were spilling out. Yet in every single one of these instances Wade was conscious and even kept fighting while that was happening. All of these under various writers, story arcs, and years.

Beating Sabretooth isn't impressive at all. Wolverine has oneshotted the dude. Silver Sable (who is rather low level, probably Huntress/Batgirl level) has beaten him without even laying a finger on him.

Your argument that Wolverine has one-shotted Sabretooth therefore making the feat that Iron Fist fought him while freaking blind is unimpressive is flawed not only because you simply dismissed Danny's handicap during the fight, but also dismissing the context as to why the feat is so impressive. Sabretooth is more of a jobber nowadays but when that feat happened it was in Iron Fist vol.1 #14. This issue was published in 1977, and during this time period Sabretooth was in his prime. During this time he was able to tag Spider-Man, stalemate Wolverine if not outright defeat him in close-quarters encounters.

The latter two issues are towards the 90's but Iron Fist has also encountered and fought Iron Fist during that time period too, and more.

So no, your simplification and lowball of Sabretooth doesn't fit at all given the context and time period. Sabretooth has only become more of a jobber recently because writers mishandled him and that was in more modern times as opposed to Classic Sabretooth. Not only that, but IIRC, they retconned his low showings to being clones of Creed, so that argument doesn't hold up either way. There's no way someone that has enhanced senses, strength, sharp claws able to injure Logan himself, enhanced strength and speed arguably greater than Wolverine, and a healing factor on par if not greater than Logan's.

And tell me one instance where a lower level street leveler like Silver Sable can take out Deadpool without specific context and a situation favoring her without it being a low showing for someone formidable as Deadpool. Silver Sable is impressive in that feat merely because she compliments Daredevil who is already a formidable opponent for Deadpool, and yet Wade had to fight both of them simultaneously.

Beating Wolverine ranges from impressive to not even being quantifiable. Cause he jobs and loses skill over time. So many peakhuman street levelers have fought and survived against Logan. He's not quite the badass fanboys want you to believe.

Yes many peak humans have survived against Logan, but it's usually either because he isn't trying to kill them or they have to have the character survive because they're popular or an established villain. Wolverine doesn't use skill as often against fodder, that is true, but almost every time he's fought against a top-tier Marvel combatant he's demonstrated why he's so dangerous. He's defeated Captain America in close quarters, beaten Iron Fist in a short sparring session, gotten the upper hand on Wade, shown explicit knowledge of pressure point techniques, been commented on by other martial arts masters in the Marvel Universe, numerous handbook entries confirming his skill via description and ranking, and more. You can say what you want, but his showings show otherwise.