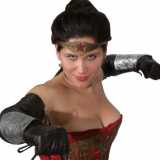 I was checking Internet when I found this picture of a Green Lantern Corps member wearing a helmet with wings. Is that Thor's helmet? Sorry for the resolution but I couldn't find it bigger and better.

In Fritz Lang’s movie Metropolis (1927) we see a robot turn into a woman with feelings.

In Bladerunner (1982) the Replicants are looking for their creator because their life period is about to expire, and we remember how Rutger Hauer’s character, Roy, saves Harrison of death. A clear sign of humanity.

In Ghost in the shell (1995) everybody has a synthetic body but they have almost forgotten what it means to be human.

In Bicentennial man (1999) Robin Williams is a droid who starts to develop feelings and he’s finally recognized as a human.

In I, robot (2004) a robot is accused of killing a human and when the cops insists he bangs the table. That’s a human reaction.

Also a sign of humanity can be seen in C3P0 because he’s a coward when it’s a droid. All the character in these films has in common that they finish having feelings, they’re more humans than humans. Humanity has made machine to humanize.

Have you ever imagine yourself with mechanic parts in your body replacing your lungs? Some would say is an improvement for humans, that we would no longer be that delicate being we really are, easy to break and hurt. That being that has no perfection. That you can be a person you can’t age so you elude death and live forever.

These days we see robots that one day will replace people in dangerous situations, something that is positive, but I see robots cashing you for a ticket in Japan. How cold and terrible that sounds. And what about those robot dogs that can’t give any love like a real one.

I think of this and it frightens me that one day our spine and brain could be inside a mechanic body and live forever, of course we would never be afraid to die and we would able to go far places in the universe, and possibly meet new life forms.

I’ve finished reading Aphrodite IX and the main character is a perfect woman with lovely face and perfect body, but she’s a droid, under that perfection there’s a mechanic body. I heard people saying “I wish I could have a droid like her so I could have love”. Love from a machine.

Shall we end in a synthetic shell, or, shall we accept that humans and feelings can’t be replaced?

Going to a desert island


I've been wondering: what comics would you take to a desert island and why?
5 Comments

I imagine my game with the heroes of DC and Marvel combining them to fight against the villains of both collections in different cities od the world. Think of you controlling Batman and fighting alongside Spider-man. Or Wonder Woman with Storm. What about Wolverine and Superman?

The cities would be real and veru detailed.

Of course with good music and good sound effects.

How do you imagine your dream videogame?
1 Comments


Checking the movies made in the 1970's and in the 1980's we found Star Wars very advanced, other worlds and a lot of technology we thought it was from another galaxy.  But as years go by I've realized that technology in Star Wars is obsolete, we keep seeing the same droids, the same controls for the spaceships and other vehicles.

Droids like C3P0 are ridiculous in this moment their design it's like one of those robots they made in the 1950's-1960's they haven't evolved, at least not like others designs we have in different stories not related to Star Wars. Astromechs talk with beeps so nobody can understand them. Has anybody suggested George Lucas to merge these droids and just make one.

The spaceships are controlled with "steering wheels" or joysticks when in reality there are plans to make fighters controlled with the mind. The inside of the spaceships it's a mess of tubes and cables and sparkling lights. They might go lightspeed but they need a good change in some things.

The restaurants, bars and cantinas are like the ones we have on Earth.

Some constructions in Coruscant resemble buildings of New York.

What about information? I've seen images of Star Wars that look like a TV news program of our days.

The real advanced technology I consider it's lightsabers something that may not be possible to make, needs some energy load and they work, we only have theories of how to make one.

I've seen comics of Iron Man where technology it's more advanced than many other planets in a galaxy far far away.

This possible reasons it's what is making many people to be tired of Star Wars.
22 Comments


Yesterday, Friday, I was at a friend's home playing DC Universe Online. He had to spend a lot of time to load the game in the PS3 because the game has to download many things. He told me the PS3 spent one night to download everything and he has to pay a fee to play.

When we started to play I made my customed character based in Batman, I realizes there aren't many possibilities as I thought to make a great character of your own. When were playing the game the city it's huge and has some nice designs, but the A.I. it's awful every enemy does the same all over the game, the graphics are like when we only had games in PC, the textures are not realistic. My character could fly but it took a lot of time to get from one place to another. The game's repetitive.

I hoped this game was going to be entertaining but it's boring and slow and sometime you have to re-start the PS3  because the game stucks.

In these days we have a lot of possibilities to kae good games with good graphics, spund and many other things. Is this the best DC people can do for their games? Those trailers were so good and realisitc.

Save your money and wait for Batman Arkham City which I hope it'll be better.
5 Comments

The lights run off and the logo of the producer appears on the screen. Credits roll and we see the title of the movie and people cheer.

The movie finsihes and you leave the theater with a smile on your face and you recommend it to your friends.

Have you ever thought of your dream movie? What's the story about? Who would write it? Who's going to be the director? Who are the actors? I'm sure we all have plenty of ideas about this. My head is full of ideas.
4 Comments


We open a comic and see hgreat illustrations inside that put us aways of reality for some minutes ans we feel better, sometime they kepp us wishing more and the next release seems too far to come.

You check it again and you think: I wish this heroe would be fighting against this villain.

Unfortunately, many us we can't do anything because we don't know how draw or simply because put this heroe and this villain together it's impossible because they belong to different publishers. So if you could make your dream comic, how do you imagine it? What hero do you want to see fighting against what villain? What artists and writers would you like for this comic of yours?
9 Comments

Where are those charaters?


Where are they? This is the question I made to myself yesterday when I was checking the news in comics for the week. What's going on with Captain America, Iron man, Hulk, Daredevil or Elektra? What happened to them?

I have the sensation since Disney took over Marvel that they have been reducing the appear of some of the characters. Iron Man or Hulk were more present before but now nobody talk about them as much as they did. What about Fantastic Four? They lost a member and now Spider-man seems to join them and people I know say this team won't last long, also the way they treat some villains like Dr Doom he has lost importance when it's one of the flagships of the villains in comics.

I remember seeing Mickey mouse disguised as Wolverine when Disney bought Marvel and I realize that X-Men are having more importance than before, there are many stories of X-Men than ever, not only in comics but in movies. We had a spin-off with Wolverine and now we have, let's say, a prequel. Silver Surfer has his mini serie but I don't know many people interested in this character. Where's Elektra?

If you ckeck other publishers they keep working with their usual characters and their popularity had grown. I heard many people talking about "Morning glories" and how interesting some of their stories are.

Months ago Disney had to go on a trial because of the rights of Iron Man with Paramount Pictures. I think executives in Paramount have been feeling that this character was "losing power" and that could affect their box office.

Does anybody have the same sensation as me?
2 Comments

You wake up and you're a hero


Imagine this situation: one day you wake up and you feel your body isn't like other days, it's stronger, you don't feel tired, you need to movee. You realize you have become the hero you ever wanted to be.

Under the house an incredible hideaway with your suits, weapons and vehicles you just could dream of.

How do you imagine yourself being a hero? Do you have three razors on each hand? Can you fly? Maybe you can go through a wall. Do you throw webs? Or, you're a different hero.

Say how do you imagine yourself being a hero.
18 Comments