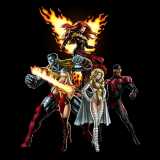 so this Celestial.... is the one whom Apocalypse gained his armor from.... i mean he looks like an amped up Apocalypse even has same mouth, a on his armor and everything

X-men: Apocalypse.... takes place in the 80's. at the end of DOTFP wolverine wakes up in the X-mansion in the new timeline but doesnt remember anything about the new timeline as stated he is the only one that remembers the original timeline and the last thing he remembers about the new timeline is that he was thrown into the water by magneto. as far as the setting and why the movie is taking place in the 80's is because Xavier is telling wolverine about what happened to him after he was pulled from the river by Mystique/Stryker. like in Legion Quest/Age of Apocalypse comic arc with mutants being revealed to world alot earlier apocalypse rises up and tries to take advantage. also wolverine showed young Xavier some of his future as well as some of the x-men hence xavier already knows about scott, jean, & storm therefore he was already waiting for them before he originally did. (hopefully wolverine showed him enough so that we dont have a repeat of FOX's version of the phoenix.)

that Celestial looks an awful lot like apocalypse.... wonder if thats what became of him when the celestials came for him & saved him from the X-men & Avengers

the main difference is that the AOA Apocalypse came into the forefront many years before the 616 version. AOA version pounced on the world before the organization of any of the super hero teams, so he basically took over unopposed as their were no avengers, FF, or X-men to stand in his way.

im hoping the reason the spell didnt work is because magneto was already under the affects of the inversion spell & that was the reason why the second spell she hit him with didnt work. id agree with that as opposed to changing the fact that magneto isnt really wanda & peitro's father

i agree, even thou the avengers are supposedly the Main team of Marvel they have been bottom feeding off of X-men, FF, & Spiderman for years... i mean why else would Avengers need Prominent members from the X-men, the whole FF, & Spiderman to join their ranks

3) set Cyclops up to become a more involved leader of not only the X-men but to build him up to his current status as revolutionary, defender of mutant race.

time travel has always been fickle when it came to marvel.... but one constent that ive noticed is that when it does come to time travel, all trips into the past bring them to the 616 past (DoFp for prime example) when someone travels to the past regardless of which alternate future they come from they always wind up in the mainstream 616 past, so with that being said how can they not be the O5 from 616? when teen cyclops was killed didnt future/present scott vanish from existence briefly..... isnt future/present cyclops from 616?????

Emma, Angel Salvadore, Banshee, & Azazel all died after First Class & before the begining of DoTFP.... if there is a resemblance then it was by mistake. the whole reason for DoTFP was to fix most of the inconsistencies in the original movies..... to have emma alive wouldnt make sense unless she was one of the horsemen in the next movie which also takes place before the ending of DoTFP.