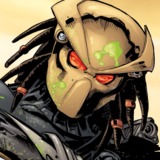 What is life if not a hunt?

Abilities: Xiandra possesses the strength, speed, agility, and endurance of a peak human of her size. Her Ephemeran heritage gives her an innate resistance to all forms of magic, which she can strengthen through meditative concentration. Her ability to focus allows her to mentally block out all but the most debilitating forms of pain.

Skills: Like most Ephemerans, Xiandra favors melee weapons, and has achieved a notable mastery of spears and bladed gauntlets. She has a talent for picking up on the nuances of weapons very quickly, even those in which she has no formal training or experience. Though she does not care for them, she recognizes the utility and occasional necessity of ranged weapons, and is a skilled sniper. She has trained with Sauroid hunters and commandos since childhood, and has developed an almost preternatural affinity for stealth, hunting, tracking, and wilderness survival. Her hand-to-hand training shows both Ephemeran and Sauroid influences, and she can claw out a foe's eyes or sink her teeth into their jugular as effectively as she can throw a punch, kick, or elbow strike. She is knowledgeable about a great many poisons, both natural and manufactured, and highly skilled in first aid, as Sauroids engaged in a hunt must tend to their own wounds on the move.

Armor: Xiandra’s armor is highly modular in design, allowing her to modify it to meet the specifications of a given mission or target. The primary “armor” portions of it are composed of duranium, a rare substance that combines the strength of titanium with a unique non-Newtonian property that allows it to absorb the shock of impacts, and each section is detachable, allowing her to add more for when heavy combat is expected, or to remove some for increased speed, agility, and stealth. The plates fit over a mesh weave bodysuit that contains strands of Arcanium, which allows her to use her natural arcane resistance to actually reflect spells back at the caster. The weave also functions as an invisibility shield; when activated, it obscures her from vision, and even disperses her heat signature, masks her scent, and obfuscates her aura from casual scanning.

Helmet: also constructed of duranium, Xiandra’s helmet can fully seal in hostile breathing environments, using a built-in filter to provide her with clean air. It allows her to switch her vision between normal, night-vision, and infrared modes, and also contains the HUD targeting system for her shoulder-mounted plasma cannon.

Spear: Xiandra’s favored weapon, her spear is telescopic, retracting to the size of a standard flashlight when not in use. It is constructed of a material of similar durability to tungsten, but with the weight of aluminum, allowing her to wield it with stunning speed and finesse. The bladed head has a molecular cutting edge, enabling it to penetrate most substances with surgical efficiency.

Gauntlet blades: the twin blades that spring from the gauntlets of Xiandra’s armor are composed of the same material as her spear, and have the same lethal edge. Additionally, they are coated in a potent toxin that is effective on most human-sized biological creatures, causing their musculature to be consumed in searing pain, as well as preventing any healing or regenerative abilities from functioning. The toxin generally flushes from a victim’s system in an hour, but this is usually more than enough time for the huntress to make her kill.

Explosive dart: launched from her right gauntlet, the dart will embed itself in a target up to 30 meters away, whereupon it will detonate a small volatium charge. The charge will often be enough to kill or disable a creature of human size and durability, and will usually stun or at least distract larger and more durable prey.

Incendiary spray: Xiandra's left gauntlet contains the launching apparatus for a spray of chemicals that ignite upon contact with oxygen and will adhere to most surfaces. It will burn at about 3,000 degree Celsius for about 10-30 seconds, depending on the oxygen content of the surrounding air.

Electroshock stars: Xiandra usually carriers between six and two dozen of these deceptively small weapons. When they embed themselves in a target, they proceed to release a 200,000 volt electrical charge, often stunning or outright incapacitating said target.

Homing disc: resembling a chakram, this razor-sharp disc interfaces with the targeting HUD in Xiandra’s helmet to lock onto a target, and will pursue said target, going around (or through) obstacles. It is launched by being manually thrown, but continues to build momentum until it reaches its target, and can slice through a metal utility pole without slowing down.