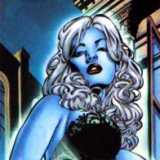 Ever heard of Wave 9? They're a group of talented young artists who have banded together to show off their talent. Among them is Kyle Smart, who obviously has a love for geeky things too.

I'd been searching for some decent Nightwing fan art to show off for a change, and stumbled across a few posts about the image below. What none of those posts mentioned was that the Nightwing picture was one of a series that encapsulated a whole Bat-Family! Shame there's no Steph or Cassie, but this was more about the visually striking than a complete collection of everyone who ever wore the Bat-logo.

I don't believe that these are available as actual posters, which is a real shame. But I would so love to see these on my wall... Especially Nightwing ;)

If you like these, then don't forget to check out Wave 9 on tumblr where you can find Kyle Smart and his collaborators.

After last week's marathon of 30 JSA members drawn by Jun Bob Kim, I thought it would be fun to follow up with a mighty Marvel marathon! After completing his 30 JSA in 30 project, Jun Bob Kim moved on to 30 Avengers.

If wnt to catch up with his tribute to DC Comics classic heroes, you can find them in three instalments: Here, here and here!

This is Part Two of Two! Please also check out Part One!

This second half contains my favourite of the lot, Ms Marvel... because I own this sketch :)

After last week's marathon of 30 JSA members drawn by Jun Bob Kim, I thought it would be fun to follow up with a mighty Marvel marathon! I've been a fan of Jun Bob Kim's art ever since he appeared out of nowhere and won my X-Men Evolutions inspired Contest with his amazing rendition of Colossus. Anyway, after completing his 30 JSA in 30 project, Jun Bob Kim moved on to 30 Avengers.

If you missed the tribute to many of DC Comics classic heroes, you can find them in three instalments: Here, here and here!

Because there are so many images, I thought it would be easier on your internet by splitting this into two posts...

This is Part One of Two! Please also check out Part Two!

Following the popularity of the Splatter Painted Heroes By Arian Noveir that I posted on Valentine's Day (because I love you!) I found some more witty fan art that you might like.

Marissa Garner is a multi-talented artist. She's not only an illustrator, but a sculptress too! She works on her own comic book called Stitchery. I've no idea how she came up with the idea for these genius designs; popular geeky franchises transformed into stained glass windows! There's something for everyone, comic book super heroes, shoujo manga, anime ponies & transforming alien robotic life-forms!

If you like what you see here you can find more about Marissa Garner at her website, or you can find her on DeviantArt as nenuiel.

Because it's Valentines Day, because I love you so much, and because not everyone likes Zombies, I thought I would give you some more eye candy.

I don't know much about Arian Noveir, but his talent more than makes up for that. This is a series of paintings with very basic details, lots of violently effective splatters and tonnes of comic book iconography!

So who is your favourite?

Happy Valentines Day! Nothing quite says 'I Love You' like zombies!

These images dated back to Halloween 2011, but I stumbled across them earlier today. Andre De Freitas is a Peruvian illustrator & photographer who sees the beauty in stillness and therefore draws as if he is taking a photo of his subject. His imagination has created some beautiful original works, but also taken the time to appreciate some of the more geeky things in life.

He's drawn a selection of characters from comic books, video games and books (both old & new) and given them the Zombie treatment! Not just the usual Marvel Zombies, although Iron Man makes an appearance to represent the "House of Ideas". There's also: Archie Andrews, Charlie Brown, Donald Duck, One Piece's Monkey D Luffy, Popeye the Sailor Man, the Teenage Mutant Ninja Turtle Raphael, Street Fighter's Ryu, Tintin, "Waldo", the 'Butcher' from Gangs of New York, and of course it wouldn't be complete without a Zombie Batman.

And if you're tired of seeing zombies, then I thought I'd throw in some DC legends for you to admire (although this was already a fairly image-heavy post, so please forgive their tiny thumbnails).

The concluding part of Jun Bob Kim's project to draw 30 JSA Members In 30 Days. Although there's 30 characters, there are actually 32 images in total as Wonder Woman is lucky enough to get 3 pictures dedicated to her!

I hope you've enjoyed these as much as I have. Personally, it's been an eye-opener and an introduction to some Golden Age characters I wasn't aware of, compared to their assorted Silver Age, Bronze Age or even Modern Age counterparts. There are quite a few Sandmen and Starmen (curse you DC Comics & your endless mantles & legacies!!).

Which have been your favourites

This is Part Three of Three! If you like these, then don't miss Part One or Part Two!

This is the second part of a spotlight on Jun Bob Kim's project to draw 30 JSA Members In 30 Days. Again, there's an eclectic mixture of Golden Age, Silver Age, Bronze Age & Modern Age characters who have been associated with the JSA at some point in DC Comics history. Because there are so many images, the 30 characters have been split up into thirds and presented alphabetically according to their codenames.

This is Part Two of Three! Please also admire the work in Part One & Part Three!

Every now & then I like to highlight the super hero work of artists who deserve some recognition for their hard work & creativity.

Take my internet friend Jun Bob Kim for instance, he initially wowed me last year with his contest winning picture of Colossus. I've been following Jun Bob Kim on Twitter ever since, which is where I see regular updates on his latest projects. One of those completed projects is his 30 JSA members drawn in 30 days, where he had to draw one member of the JSA per day. Some are from the Golden Age, some Silver, some Bronze & others are more Modern.

This is Part One of Three! Please also check out Part Two, and Part Three!

Over the last few months, artists Kevin Wada & Max Wittert have been giving the X-Men a make-over. Inspired by Project: Rooftop, they originally redisnged a handful of X-Ladies to sell as prints at APE (Comic Con's Alternate Press Expo). They had such fun & success with the first 'Round' of designs, that they've redesigned more & more X-Men with the aim to give each character a new look while retaining their unique style & iconography.

So which redesign is your favourite from Round 4?

I just LOVE Dani Moonstar's Sleipnir shoes! But they look so painful! With so many beautiful X-Ladies to choose from, it could be years before they get around to my favourite former fashion diva, Boom Boom! ;)

If you like what you see here, then please support & check out the artists' blogs: Kevin Wada & Max Wittert.

Blogs Created:
116 blogs
Most Commented blog:
What Do You Think... About The Mystery 'Age of X' Characters?
Total Comments on blogs:
1975 comments