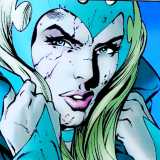 yeah but they combined to make a Cosmic Cube.......which then became Kosmos and ejected molecule man...but arguing semantics like that is pretty pointless since the fact you're just shrugging off an OFFICIAL up-to-date source which outright mirrors what you're contesting here is more important.

by that logic all three times when he killed himself and remade himself as a new born infant in secret wars ii should have a separate page too. oh and how about the vision.....i suppose he'd also need about 5 different pages because he's had new bodies and new personalities so much.

beyonder is an abstract. a convuluted one at that. kosmos/maker has never had a handbook entry independent from the beyonder because they're an extension of the same being. the handbook entry is OFFICIAL. kosmos might present itself as a seemingly different character, but it's no different to when the beyonder was convinced he was an inhuman mutant or a being from another dimension or anything else he's thought he is. he has the power that what he thinks is what he is. and i seem to remember someone coming along and deleting a page for silver surfer's surfboard without any discussion (and ignoring the fact it had been discussed) because it was an extension of the surfer's being.

and apologises i don't have a scan of beyonder's handbook profile but i have two print editions......this one is from the thanos redemption trade released a month ago, included as a bonus and they were all updated to current (thanos' entry had info from that hickman garbage....that's how up-to-date they were)......idk if these can be read but....these are far more an actual resource than "one mod says so"...

some choice extracts from the entry:

"With the mortal body destroyed, the Beyonder's full power presumably once again walks the multiverse."

kosmos is the same. it was a new form for the beyonder just like how originally he was a bright lighty in the sky. the fusion was done with quickly and molecule man continued to appear normally and at that point kosmos was JUST the beyonder. kosmos was referred to most the time as "the beyonder" and the handbooks have it all under the beyonder's profile. AND all but ONE of those 13 kosmos appearances were already all tagged with the beyonder page too.

The General - Change to General Piper

the general was his codename.