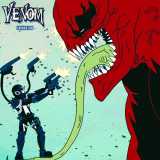 Seems pretty one-sided. Spidey regularly defeats the Lizard, and Kaine is a much meaner version of him.

The introduction literally points out the fact that Spider-Man often requires a plot device to defeat Curt -- he's regularly stated that Lizard's too durable for his fists alone (even when admitting to not holding back). No one here is obtaining an easy victory.

3/5 for me, deff the best issue of this mini, but personally to me it doesn't say's much, maybe it's because I was expecting this mini to be more serious.

im going with Agent Venom. Not only he's got the strength level on his side he also got sneaking on his side, specially in a city where he can blend with the environment at any time and either go with a head shot or guerilla tactic (like in Venom 35 against the Slayers). People may say that GG got the overall advantage(Intelligence and Mainly Fire) well Agent Venom aint no chomp and he has proven that on his ongoing. And as fire goes. well he had plenty of action against it thanks to the good ol' Jack O' Lantern, when he wasn't puking Fire from his mouth to Venom's face, (point Blank I might add) he also love to spray fire at him just for fun, in the end of the battle Venom got the upperhand (I might add in control). Also When he fought the Faux lantern the place where they were fighting was on fire, making him weak but that didn't stopped him from fighting. But there is a specific battle during Venom 16 where he fought the new Hobgoblin who if you look at was built to destroy any symbiote with his arsenal, still Venom stood on par with him, ultimately beating him (while in control). Also Agent's Venom gear consists of weapons such as multiples handgun, sniper riffle (either equipped with a silencer), grenades, stun grenades + more. Also his creative way in using the symbiote make him a real threat against Goblin and anyone, that's why im going with him. And if the symbiote is in control, oh boy. It would be priceless if Agent Venom forces Goblin to swallow a grenade like some of his opponents have. Have a good one ya all ; )

Venom's fire resistance has increased ever since bonding with Flash. Each time he has tussled Jack O Lantern, Jackie Boy threw up Fire in his face (Point Blank) and that didn't defeat him.

Try purchasing or reading Venom: Flashpoint which includes the short story of AMZ 654 (when Flash is given the symbiote), AMZ 654.1 and Venom 1. If not then read Venom Vol.2 by Rick Remender which includes:

You can skip the MoE and U-foes arc, there pretty much the most average of the run.

Well in 2011 the Venom Symbiote got bonded to former bully turned war hero Flash Thompson, here is a link to a guide to his series which sadly ended this year.

This series is Excellent overall, great story and art. The only arcs that are average are Monsters of Evil and the U-foe arc.

Flash Thompson becomes the new Venom(after he volunteers for the new Project rebirth), becoming the government's new special agent. As he goes on mission he got a certain time limit (48 hours) before the symbiote bonds permanently with him, if that happens the government will trigger a bomb implanted in the symbiote and killed them both. During his mission he must stop an arms dealer named Crime Master along with his right hand man the new Jack O' Lantern, to avoid the shipment of weapons around the globe. He also has to deal with his personal life as Flash Thompson..his responsibilities to his girlfriend Betty Brant and to deal with his Alcoholic Father.

a New mission for Venom as he has to enter Manhattan which is infected with a deadly spider decease where people are being transformed into men-spiders. Along the way he battles Eddie Brock who at the moment is the entity known as Anti-Venom, and must face the big bad of this arc the Spider Queen. And to make things worse his father is Dying.

Agent Venom must go Awol and take the symbiote with him after he gets blackmailed by the Crime Master. In the meantime Cap.America comes in to shutdown Project Rebirth. After Agent Venom fights and defeats Cap. America he must rendezvous with Jack O' Lantern and go with him to Las Vegas to Acquire the Toxin Symbiote (Carnage's son).

Agent Venom must team up with X-23, Red Hulk and the new female Ghost Rider to prevent Las Vegas from being consumed by Hell itself, Blackheart is the big bad in this Arc.

Agent Venom returns home after he is recruited by Cap. America to become a Secret Avenger, he must also deal with his personal life, which involve his mother, sister and the women he abandoned Betty. At the meantime Eddie Brock who sacrificed his AV symbiote during Spider Island is on a genocide quest in destroying symbiotes. (Somewhere along the lines Agent Venom battles Carnage during the Carnage USA arc.) Later Agent Venom decides to go after the Crime Master and Jack O' Lantern to avoid more conflict for his and his friends personal life. Everything backfires when Flash is overwhelmed by Crime Master's Savage Six, which include Jack O' Lantern and the new Toxin Eddie Brock.

Agent Venom is given a mission to find out what the DOA is up to. Here he battles Damian Hellstorm.

Agent Venom Must go after Carnage who was broken out of prison, and teams up with the Scarlet Spider to try to stop Carnage's killing Spree. But things go unexpected when Carnage goes to the Microverse ( a Universe that exist within our Universe). Now they have to team up before Carnage destroys the Microverse...which can lead to the destruction to our universe.

Venom goes to Philadelphia to investigate the disappearance of a reporter which discovered a conspiracy held by the U-Foes.

Flash Thompson moves to Philly and tries to star a new life with a new job as a P.E. teacher in a local high school by day, and a local super hero at night as Agent Venom. But things go uphill when Eddie Brock/Toxin go after him to eliminate him for good.

As he continues his life as Philly's hero he must tangle with local crime boss Lord Ogre who has put a bounty on his head, while Agent Venom must deal with on of his student who discovers his identity and becomes a new symbiote by the name of Mania. In the Meantime the DOA resurfaces and tries to kill Mania. Agent Venom must take responsibility over her and Flash must confront the Venom symbiote and ask him how Mania became to be.

As of now he is guest staring in the ''superior''spiderman series. He is later set to appear in Guardians of the galaxy.

Carnage resurfaced in 2010 after presumably being killed by the sentry

he returned during his family feud mini series:

after that he conquered a smalltown in Dovertown Colorado, this miniseries is known as Carnage USA: http://www.comicvine.com/carnage-usa/4050-44526/ (this marks his 1st encounter with Agent Venom)

later he faces both Agent Venom and the new Scarlet Spider (Kaine Parker) in the Minimum Carnage series which was excellent: http://www.comicvine.com/minimum-carnage/4045-56935/

after that Cletus Kasady got lobotomized living the symbiote in full control. Either way the next mini series he appeared in was ''Superior Carnage'' which actually was pretty lame except issue 5 where the symbiote managed to heal Cletus.

Carnage conquers a smalltown in Colorado Dovertown with his symbiote. As the Avengers (Wovie, Cap. America, Hawkeye, Ben Grimm and Spiderman) are sent to stop him, but they are defeated and possessed by him except Spiderman whom manages to escape. Agent Venom comes to back them out. He is finally defeated and contained in prison.

Agent Venom Must go after Carnage who was broken out of prison, and teams up with the Scarlet Spider to try to stop Carnage's killing Spree. But things go unexpected when Carnage goes to the Microverse ( a Universe that exist within our Universe). Now they have to team up before Carnage destroys the Microverse...which can lead to the destruction to our universe. Cletus Kasady ends up lobotomized by the Scarlet Spider.

the Story revolves around the villain the Wizard who tries to reform his Frightful Four with Carnage as he's muscle of the group. By end of the story the Carnage symbiote heals Cletus Kasady's brain.

I read it....and I agree...5 stars it's too much, I personally thought this issues was very slow paced and boring. superior Carnage was better.

Venom..oh and would love to see Carnage