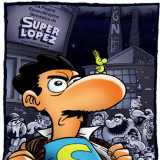 Well. You know. It's only a figure of speech xD

Daken literally explodes hugging Wolverine. But yes, in a world like Marvel always could use a teleportation device or something like that to elude death. However, the "no explanation" and the differences between the way Daken acts, speaks or tells the tale of his life before and after the "death" is very strange. Remember never was lazy when he has to dig on continuity and Daken is "too young" as character to commit so huge mistakes, isn't it? Who knows

Some years ago, Daken was dying when his powers go crazy, and he kills himself in front of Wolverine to take revenge against his father. It was a forceful and disturbing death as culmination of the days in which Logan's past punch him in his face, with the Red Right Hand all those stuffs.

But then, Daken reappears in Uncanny X-Force, speaking of himself like a child, being confident in Sabretooth (instead of good old Machiavellian Daken) and telling Wolverine of a childhood that it wasn't the same that we know. Remender never explains how Daken was alive again, but in previous comics Deadpool investigates White Sky, a private agency that clones, programs and grows specific individuals for their clients.

That give me the suspicion that Remender's Daken is not the 'original Daken', but a 'new Daken' created by Sabretooth with White Sky services like 'All-New Fanthreemex' to torment Wolverine. This could explain why Daken is alive again and why he doesn't act exactly the same. What do you think?

p.d: Excuse me if the text has any grammar error. Not my native language.

Right now, Fantomex is better death than alive. To save Genesis, EVA could continue with Fantomex's original plans about the child while Genesis brings "Uncle Cluster" back to live. But not as Fantomex, he must reborn as Apollyon the Destroyer, new Apocalypse's Horseman Death.

I love Remender's comics so much. He has the guts to write courageous tales and the taste to do it right. With his first twenty issues in on Uncanny X-Force he gave us one of the best Apocalypse's tales... without Apocalypse.

I love Robert Kirkman's Ant Man and Peter Milligan's Toxin too and for kill them off panel I hate him. And because He got my hate, I love his work on the three titles. Remender has achieve that his characters look alive again by put them in danger and that we worry their fate. And He do it with grace.

The issue about his father. The one in Savage Land is pretty good too

My guess: They're Cyclops, Emma Frost, Storm, Magneto, Namor, Colossusnaut, Danger (the chick with wires), possibly Magik (the chick with a sword in the other teaser) and some kind of guy (Dr. Nemesis?)

Jean Grey. To the end of times.

" She was 14 in her first appearance in 1991 Don't remember the sliding timescale calculating formula, but 18 seems about right. "