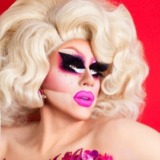 He is one of Kaan's strongest warriors:

One of the strongest warriors to serve Sith Lord Kaan and the Brotherhood of Darkness, Krul died in one of the skirmishes that led up to the battle between the forces of light and darkness.

Dree had a sense of impending doom. Death. The dark side. It made her convulse.

Kaox was powerful and full of the Dark Side. It made him strong and fearless:

Their survival would almost certainly fall to Crian, but she held secret doubts as to whether she was ready to face Kaox Krul. He was insane, powerful, full of the dark side, hungry for the kill. Rage had made him strong, fearless.

Kaox and an enraged Crian fight and cause the nearby lake to get corrupted by the Dark Side:

Crian gave into her rage then, unleashing her hatred of the man who stood across from her. She let it sing inside her, a melody of unbridled fury that renewed her strength and determination. The clearing around the lake filled with the emanations of the dark side of the Force. Kaox roared, giving himself completely to the dark side.

When Jedi inspected the battleground on which Kaox fought, they saw that it was filled with risidual Dark Side energies:

Salen Toth, a Jedi Knight, stood on the shore of a stagnant lake. It was more swamp than lake, actually The trees around it were twisted and black, with barren branches that reached like skeletal limbs toward the dark, muddy center. The whole place felt ill, deformed. Haunted. "I found the Padawan," Salen said, speaking into his comlink. "She was killed by a single lightsaber strike. I haven't found any sign of Crian Maru or the Marauder, but I'm sure there was a battle here." He looked out over the bleak lake, trying to make sense of what happened. All he found in the Force, though, was darkness and despair. "I'm done here," he said, switching off the comlink. This was a dead place. It was time for him to return to the living. He turned, lifted the body of the Padawan, and started back for his ship. Behind him the dank wind whistled through the twisted trees, and the shadows grew deeper. For a moment, he thought he heard the hum of lightsabers. He turned back, but there was nothing to see.

Valor is a power that allows Force users to increase their speed, strength and durability.

Dree caught movement out of the corner of her eye. It was as though a shadow had disengaged itself from the forest and was moving toward her at lightspeed.

Gathering the Force around him, the Marauder ran. Like a stroke of black lightning, he dashed across the clearing and into the depths of the forest, following the speeder's path. The Force-powered burst of speed might not catch the Jedi's vehicle, but it would keep him close. He opened himself to the dark side, impossibly increasing his speed even more.

Krul catches up to a speeder going max speed and manages to cut it's cables:

She pressed the footpads that regulated the thrusters until they wouldn't move any further, and the speeder shot forward. That had to be enough, Dree thought. There just wasn't any more for the speeder to give. The Marauder's face twisted with rage as he summoned even deeper reserves of dark-side energy to bring himself within a few scant meters of the bike's mortified passenger. Even with the Force, could he really keep up with them? His lightsaber flared to life and he swung at the speeder. The stroke made him lose his balance, and he tumbled feet over head and hit the ground hard. The Marauder had struck his mark, the tip of his lightsaber blades sliced into one of the bike's power cables.

Sense and Farsight are abilities that allow Force users to perceive the future or get sudden warnings through the Force.

Kaox senses all life on a planet:

Kaox didn't bother to check his nav computer; the Force told him that the unnamed planet teemed with life, none of it more advanced than a womp rat.

Krul skulked through the forest like a stealthful prowler. His senses stretched before him, making him aware of every insect, plant and flower, every small creature that cowered in its burrow or fled as he approached.

He senses two Jedi who were actively cloaking themselves:

When he was ready to move out again, he became a tireless predator, a relentless stalker. He paused, sniffed the air, and opened himself to the Force. There it was. A tingle, a subtle vibration. It wasn't much, but he had found his quarry. With a smile that was both disturbing and hateful, the Marauder moved in for the kill.

Cloak allows a Force user to hide themselves so others may not sense them.

Kaox cloaks himself while catching up to the Jedi:

The Marauder was right behind them! He must have cloaked himself in the dark side, because Crian didn't seem to have noticed his proximity. He was moving with Force-boosted speed and was almost upon them.

Alter Environment is a Force ability which allows a Force user to change the weather or condition of an environment.

While engaging Crian in a duel, Kaox and she seem to change the environment by calling forth storm clouds:

Two lightsaber flared to life. In the distance thunder rumbled out of the clouds. The storm was all around them, despite the clear sky above. Lightning flashed over the trees.

So much for a good omen, Crian thought.

With the next clap of thunder, Kaox Krul roared. Crian Maru met his charge, lightsaber to lightsaber, dark side to light.

This happens later again as the battlefield keeps changing between the two of them:

The bloated clouds splattered the ground and the lake with huge drops of greasy rain. In the downpour, Crian and Kaox each called upon the dark side. Invigorated by its power, they launched themselves, one at the other, and their struggle became even more devastating. Thunder boomed around the two opponents with each punch and kick and lightsaber clash. Lightning danced over the surface of the lake and lanced into the ground around the warriors. Crian slashed, her anger amplifying the force of her attack. Kaox dodged, whirled, and returned with a deft counterstroke. Lightsaber blades cracked and sparkled, bouncing off each other again and again, and still black rain fell from the sky.

This ability allows a Force user to shield themselves from various types of attacks.

Crian called back, hurling her anger at him through the Force, thrusting him down toward the churning water below. He shrugged off the attack and fortified himself with the power of the dark side.

Telekinesis the most basic Force power. It allows a Force user to lift, throw, pull and push objects with their mind.

Kaox Krul levitates himself over a lake:

The Marauder, hoping to find a moment's respite, wrapped himself in the Force and hovered over the center of the lake.

He hurls Crian into a lake:

He balled his free hand into a fist, squeezing tight and imagining all of his anger slipping down his arm to pool there. He imagined it was a tightly wound spring. Then, when the Jedi's weapon bounced away from his parry, turning her slightly to one side, he opened his hand and unleashed the power that was concentrated therein. The Force spread out like a wave, striking the Jedi and knocking her backward, into the lake.

Kaox Krul knows a variety of telekinetic abilities such as Grip, Push and Move Object:

Battle Mind allows a user to boost themselves through the Force in more ways than one; physically, mentally, morally.

Kaox Krul knows Battle Mind and can enhance his abilities:

Kaox Krul is stated as having knowledge with alchemy:

Kaox made his armor with alchemy, and it could form a barrier around him to aid when dealing with Jedi abilities:

He wore black body armor of his own design. It consisted of protective padding and composite plates crafted into an intricate pattern that glorified the Sith and the Brotherhood of Darkness. He had also used Sith alchemy to imbue the armor with dark side energy, creating a barrier that provided some protection against the abilities of the Jedi. He was proud of the work he had done, both the menial construction and the application of Sith magic, and he wore the armor as a symbol of his faith in the dark side of the Force.

The transport shuddered, and with a sudden shift in the stars, the journey through hyperspace came to an end, Crian tried to block out the images of Harpori. Slaughtered Duros adorned with the unmistakable wounds of a lightsaber. Men, women, and children massacred to appease the dark hunger and churning anger of the Marauder. The Madman. The Dark Killer.

Kaox Krul fights a noted Jedi Mistress - Crian - and her padawan. He was winning against Crian, before her padawan came to aid her, then he killed the padawan and fought an enraged Crian for hours. The fight ended with both of them killing each other at the same time:

Sith and Jedi flew at each other, converging above the roiling cauldron of water. Kaox's lightsaber aimed high. Crian's blade thrust low. A lightning panorama bathed them in harsh light for an instant as each was felled by the other's killing blow.