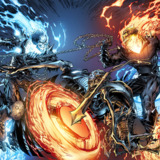 -God strength up to 70 tons

-Can lull people to sleep with his music

-Unbreakable Staff ,named Hun-Staff, it will come back to him if thrown

Allignment: Good/out to prove something

A grudge, like any wound, left untended will fester.

Hun Batz and his twin brother Hun Chouen, led a contented life with their grandmother. Artists and musicians, everything they created was beautiful and enchanting, but they lacked their father’s talent for the ball game, Pitz. Summoned to the underworld, their father, Hun Hunapu never returned. Instead his new offspring, half-brothers to Hun Batz and Hun Chauen, appeared. The Hero Twins were everything the original twins were not, strong, athletic, and clever. And they were extremely gifted at playing Pitz.

A jealous rivalry formed between the two sets of twins. The more they played ball together, the more Hun Batz and his brother were defeated. Eventually, the original twins resorted to foul tricks, aggressive tactics, and out-right cheating. Frustrated with these antics, the Hero Twins kicked the ball into a tree, knowing Hun Batz and his brother considered themselves excellent climbers and would go after it. Yet, the higher they climbed, the taller the tree grew, until they could not get back down. Pleased with their magic thus far, The Hero Twins encouraged Hun Batz and Hun Chouen to use their belts like tails in order to escape the terrible height. However, upon doing so, they were mysteriously and humiliatingly transformed into monkeys.

Though the Monkey Twins, as they are now called, came to be worshipped as Gods of Art and Music, the animosity they hold for the Hero Twins remains. Time has only sharpened their combined cunning, and they eagerly await a chance to strike back. Like any wound, their grudge has festered, and what was once a brotherly rivalry has grown into a far more deadly game.