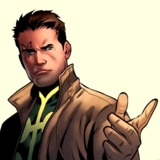 Current Occupation: Superhero, above all, but a large variety of jobs.

Billy Eldrik is capable of cloning himself.

Billy Eldrik's clones are capable of cloning themselves.

These clones are capable of exactly what Billy Eldrik himself is capable of doing. Billy Eldrik's strength, his speed, his intellect, all of these things are a part of him, and thus, they are handed off to the clones upon creation. However, these clones are different than Eldrik in one aspect - they are one hundred percent loyal. Specifically to the original Billy, or rather, the other Billys in general. When a Bill is combined back into Billy, the knowledge of said Bill is given to Billy as well - for example, when the Bill sees something the original has not seen, upon reintegration, the Billy will have seen that thing as well.

Because of this - surprisingly, given his character - Billy has a multitude of things that he is knowledgeable on, including what he estimates to be six Ph. D's. He also has a mastery of a variety of martial arts.

There is one way to determine whether or not a clone is the real Billy. The clones do not contain blood. While they can withstand a punch or two in a fight, the clones will disperse whenever something hits them that would normally draw blood. Thus, when hit by a knife, the clone would perish, but the original would bleed.

Physical stats don't come with the Bills. If one Bill does a million push ups, when he goes back to the original, the overall hive would be no stronger.