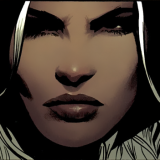 Well my room is actually pretty plain, decent but plain and compared to my friend's room, that are covered with posters of sports, comic characters, etc. my room feels even more simple. I just have this small sofa, my bed and a "entertainment center" (not as amazing as it sounds) along with gaming consoles. BUT!!! I have this one little thing, that I feel is enough (sometimes I want more) but it sits next to my TV on top of the furniture where it stands.  A small figure/ bust of Storm: This one...


I love it. Its the only collectible-type thing I own, and the only thing that is considered a display in my room. Do you know of any characters with really cool looking figures? I'm not going to become some sort of collector but I was thinking of getting one more.
Do any of you have some kinda statue/ figure in your room? Posters? Do you have many?
8 Comments

Well at least in my personal opinion it did a pretty good job. I bumped into this video on Youtube about the female characters featured in a video game called Marvel Nemesis: Rise of the Imperfects. I had never played this game so as of now I'm simply just judging it by what I've seen on the video. But so far it seems to have nailed the character's essence. For example Storm looks to have that *UMF* in this video game. From her walking animation to her flight animation: especially her flight, it looks just as what I'd picture Storm movements would look during flight (very fluid movements). Plus every character's fighting style looked spot on (Elektra's for example) . But this is just my personal opinion, I'll let you judge for yourself:

(Now this video underneath is specifically about Storm in the same video game. She is featured in the above video as well but this one focuses only on her. Just in case anyone wanted to watch it)

Thanks for reading :)
10 Comments

Purchase comic issue by issue, or wait for the TPB? Hmm...

I don't purchase much comics, well I actually rarely purchase any comics. But what I did always have was a growing interest for some super hero characters featured in these grand comic universes.  Growing up watching X-men: The Animated Series most of my all time favorites were part of or related to the X-men. So then I found myself wanting to keep current with these characters. Walking into my nearest Barnes and Noble I discovered shelfs full of TPBs, Trade Paper Backs that collected a large number of comic issues into one (which I personally thought was a complete genius idea), so next thing you know I spend about $100 worth of these magnificent book collections that very  first day. I then felt like I had officially began catching up with some of my favorite characters, "Did you know Storm married Black Panther!?" I shouted with excitement to my comic geek friend (respectfully), "um yeah like in f*cking 2006". WHAT!? So next thing you know I go browsing around the web discovering in bland detail of current events happening to my favorite super heroes where I unfortunately was still pretty far behind from where I had read. So now I'm just stuck, I want to be on top of these characters and sometimes I feel like the only way was is to just purchase every issue as there released, but TPB are SO much more convenient and I like the feeling of holding one thick booklet, ads free of just issue after issue. But it usually takes a pretty significant amount of time until a collection is released and by the time it is released I'm five to ten issues behind.... hmmm...