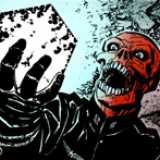 The two guys at the end of Justice League 6 were daemonites. One of them has a brooch with the same symbol that we later saw in Helspont's lair in the Superman ongoing. Plus their eyes glow like others aliens we saw in th DCnU.

The Shade maxiseries is so good it hurts, best comicbook out right now, and Earth 2 was glorious.

Question: How much liberty do you have on Earth 2? Can you bring in any character you want and do everything you prefer with them, or do you have some limitations?

Buccellato is so wonderfully random.

I thought the exact same thing. For a long time I didnt get why they where so mad over HoM and Wanda depowering them, because i thought they wanted integration. They were depowered, but they were alive, they were otherwise ok (with exceptions like Blob and Wing...) but on principle only it wasnt that big a deal. Especially in a universe where to get the powers a mutant has u can just hit the power broker, toss and turn on some radioactive gunk, or just get a power suit like jubilee! Its like, would it matter if all blondes in the world turned brunettes due to the scarlet witch? they can dye their hair... its not the same, but close 'nuff!

Wouldn't that be like black people getting turned into white people to get integrated? Some can think is right, but the majority wants to be part of the community while still be themselves. Be accepted for what you are is the entire concept behind the war against racism and conformism.

I've always imagined mutants as being mutants and humans as being humans, it creates more drama and the fight for integration becomes more difficult and so more relevant when a victory is achiaved. But hey, if we start discussing genetics, yeah, I guess at the end mutants are just human with natural superpowers.

#8  Edited By WhitOro
The lack of panels on Comic-Cons is quite simple to explain: the people on those kind of event are already going to see the movie. The producers finally undestood that marketing your comicbook movie to comicbook fans it's just a waste of money: they're going to see it anyway, they're fans.
10 years ago

#9  Edited By WhitOro
I want him in the DC Relaunch writing a series out of continuity called Frank Miller's Goddamn Batman. And I'm serious.
I love Frank Miller. The Dark Knight Strikes Again is probably my favourite comic book ever. I still can't find volumes/omnibooks of his Daredevil work, but the moment I see it I'm going to jump on it.
10 years ago

Is is weird that I really want to read Aquaman?

I'm totally with you.
10 years ago