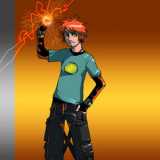 Wheeler is the Planeteer who controls "Fire". From the United States of America, specifically the borough of Brooklyn in New York City.

He got his ring when he was trying to fight off a street gang that were burning down some building and during the fight, a burst of fir gave Wheeler the ring of fire.

He was chosen because of short temper,attitude and the fighting spirit of the team.

With his power ring, he can projectiles of flame and create small fires nearby and also use it as a laser to cut rope and metal locks. His powers represent his hotheadedness. Usually small and very effective, but piss him off they can rage out of control and consume everything. But for the most part, he's reasonable and level headed.