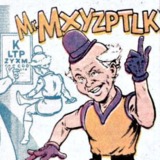 Wowie this is a terrible thread.

Doesn't action comics 975 pretty much establish that all Mxy appearances (down even to the freaking lego games) are canon?

Too many to list. Bugs is probably the single most overrated character on CV, and that's saying something.

Scans of Eternity destroying the multiverse?

I've already provided them to you around a week or so ago. You want a link or for me to post them again? Or do you remember now that I brought it up again?

Why do i get the feeling that you're going to try and say that Eternity is actually multi-eternity even though it's already been said thousands of times that Eternity is only a universal scale character and there is an eternity for every marvel universe.

In that case your feeling is wrong.

Can you show me where it was merely a "representation" or "alternate dimension"?

At the end of the day, Mxy and Bat-Mite are characters like every other. Drawn up with pen and paper. Fictional. They have no will of their own. Whatever they do is simply the writer making it such. The "real universe" they went to is no more than a picture edited on a computer with Mxy and Bat-Mite cropped and pasted onto it.

And again, assuming you've read World's Funnest, you would know that WF Mxy accidentally entered said universe, and he was horrified, and immediately left.

Superman isn't overpowered. He isn't even anything special for most modern versions.

Wondie broke it in Red Son. I can't recall any times in main canon they were specifically broken. Anytime that she's been entirely disintegrated would probably count.

He's MFTL. From what I know about the members of this team, that by itself disqualifies them.

But he doesn't blitz everyone into a paste.

Like in his encounters with Batman he usually does a lot of talking and once he does fight him they exchange blows at well below FTL speeds.

That's the Batman PIS Aura. In the Apokolips invasion he quite literally blitzed everyone into a paste.

Some arguments have been made for the team.

Do these change your thoughts? Does Supes still win?

Just trying to get some discussion going.

He's MFTL. From what I know about the members of this team, that by itself disqualifies them.