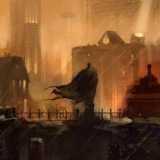 I've Made the Transition to Digital Comics by Comixology

I've always liked digital comics. Maybe because of Scott McCloud's trust in them and his experiments with the genre. The real problem with them had been that comics are print first and exist within that aspect ratio and digital comics have to fit 4:3 or 16:9 screens. Digital comics for a long time were all pirates sharing scanned Western comics to cheap people or those who lived in a foreign countries and had very little options. Great programs rose to help read these comics comfortably such as Comic Rack, which is somehow still in beta four years later. Anyway, comic book publishers were losing money and needed a platform in which to sell their products in a comfortable and profitable fashion. Enter Comixology.

Comixology has become the leader/monopoly in the field of digital comics receiving support from all major publishers. Apparently on the iPad it's just like reading a regular comic, except for those pesky double page spreads. On my iPod, back when I hadn't lost it, I read the first issue of 52 and was kind of blown away by how well their (patented) guided view works. I tried out their PC viewer which is not their greatest, but if you scoot up close to the screen it works fine. It also has guided view if you so prefer to repeatedly click or mash the arrow button.

So when DC announced they were rebooting and that they would go date-and-digital last year, they also announced that titles would be a dollar less the month after their print debut. That sounded great because I was over my monthly budget for comics. Also online I would hear horror stories of people that had truckloads of long boxes following them around when they moved. Growing up in the home of two-packrats the idea of having less stuff sounded great. Also, I would be able to take my entire collection with me anywhere I went, which is amazing. Even though these advantages are great I still wanted to help out the awesome guys down at my LCS. Also announced with the DC Relaunch was that LCS's could house digital stores powered by Comixology. I think I read on Bleeding Cool somewhere that they get a share kicked back if it reaches $100 minimum per month. Unfortunately, Marvel is joining the Comixology game late and has no titles available through my LCS's store, which is fine because I only buy DC and Image. Oh Image, that reminds me, back issues are all available on Comixology for most titles, so there is no worry of missing an issue. Thus, I am buying the back issues of Invincible and Walking Dead that I torrented to get caught up.

Overall, I'm happy with the service, I can read any comic in my collection without having to go digging and have access to those wonderful $0.99 sales. Since it is a cloud service, there is a feeling of anxiety that you might lose all the titles you bought if they ever go bankrupt. So once a month I printscreen myself copies of my purchases for ComicRack. In a way, using Comixology is kind of like when people put computers into offices and thought they'd use less paper in that I've been buying more titles since switching because they are cheaper. I cannot resell comics if I hate them as there are no refunds, but since I make myself wait a month for the price drop I have that time to mull over my purchases carefully. Unfortunately I can't get my comics signed by creators if I ever do get to a con some day, but I could just buy an autograph book or something. So that I can still see the people in my LCS I do buy at least one print comic a week. Three out of those five have combo packs and the other two I buy digitally later.

So here I am a digital comic book reader. It's probably been easier for me to transition because I only became a weekly comic book reader two years ago and only have two longboxes, one of which is only 1/6 full. I wrote this post because when I was researching whether to switch to Comixology there were very few posts about it in my Google searches. Hopefully someone making the same decision finds this and is helped by it. So in conclusion, I love the service and definitely recommend Comixology for those on the fence about it. Happy reading!

The complete listing of the 52 new DC books in September:

August 31, 2011
Writer: Geoff Johns
Artist: Jim Lee
Cover: Jim Lee, Scott Williams
Rated: T
Known Cast: Aquaman, Wonder Woman, Superman, Hal Jordan, Batman, Flash, Cyborg
Notes: I've heard that there are supposed to be up to 14 members. Flash does not have a hyperlink attached, because his identity has still not been announced. This issue will be available for $3.99 for regular in print and $4.99 for a copy of it in print and digital. Digital is $3.99 for the first four weeks, then it will be offered for $2.99

Date: September 21, 2011
Writer: Brian Azzarello
Artist: Cliff Chiang
Cover: Cliff Chiang
Rated: T
Known Cast: Wonder Woman
Notes: For the Comic Book retailers, they are letting them order this book and five other (TBA) at 15% off. Does this say something about the quality? DC needs to do Wonder Woman right for this relaunch as she was having trouble recently this is her chance to recover.

Date: September 28, 2011
Writer: Geoff Johns
Artist: Ivan Reis
Cover: Ivan Reis
Rated: T
Known Cast: Aquaman
Notes: In the cover it doesn't look like Aquaman's actually wearing Lee's v-collar and his hair air slicked back too. This book was planned to shoot off of Brightest Day to a point.

The Fury of Firestorm #1

Date: September 28, 2011
Writer: Ethan van Sciver, Gail Simone
Artist: Yidilray Cinar
Cover: Ethan van Sciver
Rated: T
Known Cast: Ronnie Raymond, Jason Rusch, Martin Stein
Notes: Ronnie and Jason are both in high school and have to deal with each other. Gail has said that the series was insisted by DC to be about their relationship as a team. Also, DC told Bleeding Cool to take down this conceptual art of Firestorm so here we go:

Notice how there's no skin color to his face. And just like that the race issues go away. (i.e. "Hey he was black, because of Jason, but now that Ronnie's back he has a white face! Was that on purpose?!)

Date: September 7, 2011
Writer: Dan Jurgens
Artist: Aaron Lopresti
Cover: Aaron Lopresti
Rated: T
Known Cast:  Batman , Rocket Red, Fire, August General in Iron, Booster Gold, Vixen, Donna Troy?, Ice, Guy Gardner
Notes: Jaime could be on the team, but it sounds like he might also be getting an on-going. Looks like Booster will be the leader from his center postiton.

Date: September 14, 2011
Writer: JH Williams III, Haden Blackman
Artist: JH Williams III
Rated: T
Known Cast: Batwoman
Notes:  Was pushed back in May and June, probably because they knew for sure then that they were rebooting.

Red Hood and the Outlaws #1

Known Cast:  Batman , Leviathan
Notes:  Will be the "second season" of Batman Inc. after #10 in August. Old DCU.

Notes: Earth-12. Confirmed via Twitter by Beechen. Guess it will be starting in October as the bookshelves will be crammed with the 52.

A continuation of Weird Worlds. Slated for October.
1 Comments

So how does Terry McGinnis fit into the mainstream universe?

From the perspective of the show it's obvious the choice is Bruce. Still with what Grant Morrison's been doing with Batman so far it would make more sense for Damian to raise him.  SPOILER WARNING: Click here to reveal hidden content.

There's also the issue that since Bruce is Terry's biological father if Damian were to be assuming Bruce's role in Morrison's version would he be Damian's son, or would Waller use a copy of Bruce's DNA she had lying around still.
Also there is the issue of how Terry would deal with Damian, with Bruce he has a gruff pretty-cranky old man. With Damian he would have someone who would be giving him orders that might entail breaking a limb, or even killing. Who knows he might've mellowed out a little bit, but I find it doubtful. Bruce was someone Terry could look up to with respect, someone who could find a way to do things without killing, not so with Damian. My verdict is I think Terry would be a much more respectable Batman with Bruce's teachings, but a Batman Beyond trained by Damian would be very interesting. If there was ever a comic devoted to Damian's Batman I think Terry should eventually be his sidekick. I say sidekick, because in the 2-page clip "Eternal" Damian is shown talking to Connor in the future and both in their respected father's roles. In that conversation he says thing are going well with Terry. I guess that could be explained through Damian using the Lazarus Pits like he did in the alternate future in Justice League Generation Lost #14 where he lived well into his 100's. Was it 160? Anyway, I've spent a lot of time talking about Damian and Terry over Bruce, because they seem to have a more open future. No matter what, DC is going to keep Bruce doing what he does in Gotham to some degree, or they might actually make the call for him to retire at some point. If they do, then Damian's Batman story could begin same as Terry's Damian upbringing bringing in some very good reading. For the future I hope those two stories get some coverage, because Bruce's Terry story is being told right now. Enjoying it as I might, I can't help thinking what those stories would be like especially with Morrison at the head. But enough mental exercise for now I need sleep.
1 Comments

Blogs Created:
3 blogs
Most Commented blog:
I've Made the Transition to Digital Comics by Comixology
Total Comments on blogs:
9 comments