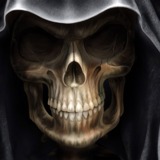 Death it's self was first to emerge from the depths. Some human pact of devil worshipers actually open a gateway to hell accidentally of coarse as they didn't expect their virgin sacrifice to actually work.

chalking up the pentagram, lighting candles, ritualistic blood letting and yes the sacrifice of a virgin.

Upon completion cracking open the earth itself quaking and a cloud of smoke arises taking form as a hooded figure carrying a Sickle.

emerging whirling said sickle slaughtering those responsible for releasing him an the others whom fused with him.

"Not merely death, no we are more, we are Legion"

As death visibility was rare until your very end of life. After fusion, the demons ability to be summoned allowed released us into this world.

Sins: All at peak levels

Immortality as Death, after fusion: Innocence, holy scripture read aloud, priests, nuns, clergy, and all other holy items repel back into the darkness.