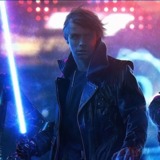 WARNING THIS WILL CONTAIN SPOILERS... YOU HAVE BEEN WARNED

"Logan" is the story of an older Wolverine who has deteriorated. Logan is no longer a hero, not much of anything really, because all the mutants "died" out. Until Logan happens upon a young (relatively speaking) nurse who flips Logan's life upside down with the introduction of his clone Laura Kinney A.K.A X-23

In a gut-twisting, heart wrenching tale of Logan and his quest to protect the young laura and Alzheimer ridden Charles Xavier, we see the true Wolverine Film we've been waiting for all this time.

can i say its about damn time... like seriously? Wolverine has a very dark very bad past, and his storylines are always very dark and very violent/graphic. The only way to properly display a Logan story, true to the character, is rated R

The Story is unique. For Legal and other dumb ass reasons, fox was unable to do the true OId Man Logan storyline (not sure how that would have translated to the big screen either) but, this story knocks it out of the park.

Logan for the most part has given up on life, hell he kept an Adamantium bullet because he thought about blowing his brains out, but Laura helps give him another purpose. One hes long since been without. He has to protect Laura so she can get to Eden.

We never actually find out if Eden exits or not, but it is irrelevant as the story line keeps you hooked until the very end... and you know when its over

this was Hugh Jackman and Patrick Stewart's final outing as their characters, Wolverine and Charles Xavier (respectively) and not having an End-Credits scene really drove the nail home of the finality.

This is the end, there won't be any more like this.

there is only 1 thing thats kinda sorta bad

If you dont cry at the end, then you're dead inside and i pity you.