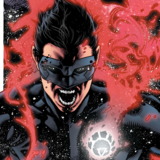 Note to me: Don't lose sleeping time over any kind of Webboard debate again.

I come across this quite a few times:

"TT Robin is a peak human"

In his universe, he is. But the human limit varies across all fiction. By our world standards as well as many fictional verses', he's not even remotely human.

I'm not even sure if the writers intend him to be that or if the idea of street leveler even exist in this verse, the guy consistently able to fight on par, if not outright overpowers/out-performs his super-powered teammates.

Basically, I want to kill these ideas so here we go.

Sections of this thread:

A kick sends a Slade bot flying and cracks the wall upon impact.

Creating a shockwave with a downward swing.

One shotting Tamaranean guards. Considering that the same EP shows Tamaraneans to be much stronger than Cyborg. This is an extreme high-end. Might be considered a PIS.

Burying a mech dog into the pavement.

One-shotting Aqualad, Then beating him up after he regains consciousness.

And Aqualad is this strong...

Punching and kicking through stalagmites.

Busting open a thick stone wall with a kick.

Overpowering a Gordanian. Gordanians can lift cars and hit Starfire hard enough to create a crater.

Tackling someone with enough force the knock over a billboard.

Throwing a big dude across the room.

Getting blasted to the rooftop of a building.

Withstanding a punch that creates a shockwave.

Being thrown into a goal and rebounds on it.

Consider that Robin's leg is fine after this, it should be a durability feat.

Send to a rooftop by Terra.

Getting punch by Cyborg.

Being punch in the face hard enough to send him flying to the ceiling.

Surviving a blast that sends a car flying.

Being repeatedly smash against a rock hard enough to crack them.

Then survives the blast of his own explosive.

A hit in the face from Starfire sends him flying dozens of meters, he recovers immediately.

Air dropping and landing on his knees.

Blocking energy beam with his staff.

Dodging a punch from behind by a teleporter.

Dodging Cinderblock punch and Jump on him.

Running along a rock wall.

Slipping through a room full of laser.

Jumping from tree to tree.

It can still extend after it has been cut.

Slicing through a very thick tree.

Cutting through a metal gun.

It's strong enough to bind Plasmus.

Catching Starfire and a Slade bot.

Lockpick from his Glove's finger.

It's made from "high density polymerized titanium. 10 times stronger than steel".

Blocking fire blast from Master of the game with hotspot's powers.

Robin rides on the stairs and jumps off a building.

Throwing 6 birdarangs at once and hit all the sprinklers in the room.

Disarming Johnny Rancid with a boomerang birdarang throw while the guy was riding a flying motorcycle.

Throwing 5 eggs to the dish behind him without even looking.

Detecting the presence of an opponent in a dark, echo-filled cave.

Learned the skills of his opponent-strength from the bear, sense from the snake and agility from the monkey.

Throwing birdarang and freezing disks in such a way that the birdarang collided with a disk in front of the enemy.

Robin devised a plan to defeat the hive in about a minute after being attack but he never got a chance to execute it as he got BFR'ed.

This result in the Hive taking over the Titan Tower.

When he returns he lead the team to their victory.

Robin figured it out that the identity of the Monsters-They come from Raven's powers.

Robin figured it out that Raven is the gem- the portal for Trigon to entering earth's dimension.