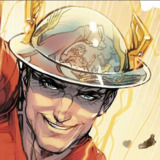 Far into the Future...

After marrying the love of his life, Wally tried to settle down and he succeeded for a while but the super-hero life kept calling him and he kept going as Flash Lightning. As his kids grew, he tried his best to raise them and to be a good father. To do things bit differently thanks to his foreknowledge of the future, to do right especially by Alex.

Years would pass and eventually Wally's identity as Flash Lightning was revealed to the world against his will but there was no going back. The fallout was terrible and tragic. He managed to protect his family, but at the cost of his legs since he became paralyzed from the waist down. Not even the advanced medical technology could help him. So, for several years Wally was retired. Thanks to his plans on and contingencies in place, he didn't have to worry about any other villains gunning for him and his family.

And then one night it all changed. It started with a storm and the Speed Force called. Wally realized the one thing he needed to in order to run again; why the doctors could not help him. He had placed mental blocks in his mind so he couldn't run. But now things changed that night during the storm. He had to get up and run again, no sense in hiding anymore. He couldn't let the world beat him down and he had. He had given up. So with great effort, at first, Wally got up out of his wheelchair and took his first step in years. Then it was another step, then another. Faster and then he was jogging before he started running. The speed force flowed through him like years past.

Returning home, Wally's wife was happy for him and that's when he knew he had to come back into the past. Now that he knew how to help Alex he could return and be the father he couldn't when he left. That's why he left all those years ago. But in between then and that moment, Wally learned something about Alex. Something only the Fastest Man Alive could handle. Wally wasn't that man anymore so the task would have to fall to Alex. A crisis was coming and he needed to prepare his son. So it was decided Wally and his wife would move back into the past.

A rip in space and time pops open and Wally comes through the time stream, yellow lightning trailing off of him as his eyes glow. He may not be as fast as he was before, but he still mainlines the Speed Force.

Wally's wife is coming in a time machine with their things to move into the house on the outskirts of Key City. For now, Wally has made the trip on his own and barely at that. He can no longer time travel with the ease he once did. Now it takes great effort to achieve such speed. He misses his youth but there's no sense in crying about it. He knew this would happen one day and he's okay with it.

Now that Wally has returned he catches his breath before he seeks out his son Alex. First place to look is the obvious. Key City as well as the house that he had once stayed in while in his younger days as Flash Lightning.