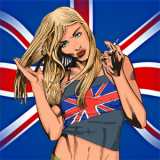 Just a quick reminder that FreakAngels is the weekly comic by Warren Ellis. It's beautiful and fascinating and well worth a look.

Most people would imagine Aberdeen, Scotland, to be a fairly nowhere kind of a place. Certainly not the kind of place to attract one of the top names in comic writing of the 21st century so far, anyway.

But this is the University of Aberdeen's Writer's Festival and there he was, on the listing. I'd imagined the weekend was going to be a load of stuffy, pompous writers telling us all how amazingly amazing they are. I don't know about the rest but that couldn't be further from the truth when it comes to Mark Millar.

He's funny, engaging and totally down to Earth. In one breath, he's telling us about his childhood, how he dropped out of university and ended up living in a dirty bedsit with little to eat and a real Johnny-No-Mates. In the next, he's talking about Angelina Jolie's part in his new movie and how they had to rearrange the furniture to cover up the fact that she's pregnant for the reshoots.

He happily sits there and mentions how he discusses movie adaptations with Alan Moore, how he worked through the industry with Grant Morrison (currently killing off Batman for DC) and then tells a story about how his brother convinced him Superman was a real person when he was five.

It was surreal, exciting and totally amazing. I even got to ask a question. I'm still buzzing from it! A really great moment in my comic-geekness so far :D