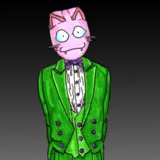 I HATED the first Red Hood and the Outlaws series from the New 52. Not just because of the portrayal of Starfire or Roy's stupid trucker hat.

But Lobdell's second Outlaw series is actually extremely good. He really upped his game with this one. The Rebirth run is very organic, the humor and plot is solid, and the characters and their interaction is excellent.

This is the story about three outcasts who makes each other better. Perfect comic? No. But a very good read.

Red Hood and his relationship to Bizarro is the heart of this book.

After a mutagen bomb detonated in New York and turned a lot of people into mutants, Stockman (who had recently become mayor) had a barrier constructed around the area now known as "Mutant Town" to prevent free migration of people in and out of the zone.

Mutant Town is a ghetto in the worst sense of the word. Most of the newly turned mutants are now homeless, are fighting for food and deal with the trauma of being disowned by their families and friends. A large number of the homeless were children without their parents, many of whom remained human and abandoned their mutant children to their fates. The mutant cat and old turtle enemy Hob has the town under his control with his gang known as Mutanimals by collecting and controlling access to food.

The Teenage Mutant Ninja Turtles moves from the sewers to the surface of Mutant Town to try and bring something that resembles order. This is quite the game changer for Leonardo and his family as they are now part of an actual community and are no longer the weirdest-looking guys in the area.

How they managed to be a couple for SEVEN YEARS is anyone's guess.

Filled with dark humor, lewd jokes, chaotic comedy and a very heart-warming but strange romance, "Un/Sacred" is a peculiar but very funny read:)

Besides a lot of story lines that elegantly fit together, Spencer also made Peter and MJ a thing again without it feeling suffocating. In fact, this run has some of the best Spider-Man and MJ in relationship stories we have read in a long time.

Plenty of superhero fun, like Spider-Man teaming up with Boomerang(much against Spidy's will) and the two of them form a (sort of) friendship.

Not to mention that Spider-Man and Jameson FIANLLY talk things out!

It finally happened. Batman unites the heroes of Gotham into one task force. Picking a group of young or inexperienced vigilantes and giving Batwoman the role of drill sergeant and full control over leadership in every mission, the Gotham Knights hit hard against crime and other threats against Gotham.

And Gotham needs a team of heroes more than ever since others sees that there is strength in numbers...

One of the most surprising members of the Gotham Knights is Clay Face. James Tynion IV does one heck of a job of turning Basil into a tragic hero as well as being a pro at writing a ton of characters as the main character at the same time. Tynion is one of the best new writers DC has, and the Rebirth run on Detective Comics shows that.

Made by Danish talent Cecilie Thorsen, "Mae's Dungeon Diary" is about a human, elf and orc who buys a small boat and goes out on adventures for very different reasons. the journey is anything but smooth, especially since young Mae is naïve and self important.

You can read it right here: https://www.graphic-storytelling.com/maes-dungeon-diary

A monkey, a princess and a stage magician goes to a bar.

That is not a joke, it is the start of one of the weirder teams DC has ever made.

Magic is in danger, so Wonder Woman decides to start the second incarnation of the Justice League Dark who specializes in the strange and dark world of magic. Problem is that no one in the DC's magic community takes her series as they see her as a superhero, not a creature associated with magic. Diana manage to make a odd little group that includes Zatanna, Detective Chimp, Man-Bat and Swamp Thing.

They prove to be a capable group... but a prophecy says that one of them will either be the one to save all magic... or destroy it.

James Tynion IV wrote this bizarre series that portraits the world of magic in DC as a world where rules are very bendable. Wonder Woman is the soul of the series as she leads the JLD with compassion and wisdom that could bring Captain America to shame.

The JLA is a mess after it was revealed that Batman made plans behind everyone's back to take them down in case they turned bad or got brainwashed. Everyone is at each others throat as they are unsure how to feel about it.

Beast Complex is a lovely collection of bizarre stories about human-like animals.

We have strange and uncomfortable tales, like the one about the pig who stuff dead animals for a living or the one about a cult of albino animals. And let's not forget the one about a camel who lets a wolf eat half of his hand because they are in love :l

All the stories are one chapter long and are essentially about relationships. both romantically and platonically. But every single one of them are heart touching.

Superboy Prime is both the most powerful supervillain of the DC Universe as well as the writer's punching bag by making his shitty existence worse and worse as he becomes more and more psychotic and even more hated by everyone he meets.

But the thing about Prime is that he is a child. A very angry and confused child who lost his entire world and then got tortured into thinking that the world he saved after losing his own was evil, that saving it was a mistake.

Like a dumb kid, he lashed out. We have all done that when we were kids. But this kid has hands that can turn coal into diamonds, meaning every strike from him is bone-crushing. So everyone he meets tries to take him down, and he lashes out against everyone who does so. It is an evil circle.

No one tried to help him or understand him, no one tried to comfort him. And that makes sense, no one owed him kindness after everything he had done. But that doesn't change that he needed kindness.

And Krypto the Superdog was kind to him. He is an animal, something pure and simple. And that was enough. That was all Prime needed to stop feeling sorry for himself and save the Multiverse. He died heroically with no one giving a damn about him besides a dog.

... And then something wonderful happened;)

After all these years, this feels like a good ending for Superboy Prime.