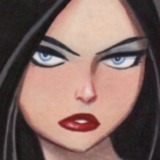 Vantablack is the best Black.

Battle Forums: Beside the batcucks there are these people, don't emulate them

Disgusting: Wonder Woman's writer don't give a rat's ass about her villains

Meredith: We knew we wanted to bring someone from her rogues’ gallery into this next arc and start to flesh that out. And I really left it up to David, because I didn't care. I didn't have an attachment to any of the villains in her past. So I said to Dave, who would be the coolest for you to draw? And I let him make the decision, and we worked the story from that.

well damn, you DC fans deserve better than this.

Batman Related: When Non Fans need to shut their mouth

https://archive.is/3yFci - no clicks for you

>But the focus whether penetration was involved is beside the point. Barbara Gordon was sexually assaulted and left for dead. Her pain and her naked body was used to shock and titillate the reader, to drive home how deranged the Joker really was without giving Batgirl a chance to fight back or even have a shred of agency.

You probably don’t remember me, but we met briefly at this year’s Emerald City Comicon. Susan Eisenberg actually introduced me to you but since you’re not much of a talker and I was nervous/shy it was a very short “Hi” “Hello” kinda thing.

Anyway Bruce – can I call you Bruce? – I’m writing this because you and your teams on Batman: The Animated Series, Superman: The Animated Series, Justice League, Justice League: Unlimited, and Batman Beyond are the reason I’ve been a long time DC Comics viewer and reader. I live and breathe the DC Universe more than anything (I have Big Barda tattooed on my arm for crying out loud!), so when I saw that you were returning to WB Animation for more DC Animated Movies, I was stoked. And then it was announced that the next movie you’re working on after Justice League: Gods and Monsters will be an animated version of The Killing Joke. Bruce, if I could make one request of you before this movie has its script locked down, it’s this: Please leave Barbara Gordon out of the movie.

I don’t say this lightly. I’ve thought about this a lot and I even had a lot of reservations writing it down, but my brain won’t shut up about the subject so I feel compelled to let you know why. Mostly it’s that I’m so tired of having this conversation because it really seems to confound some people as to why myself and a great deal of female comic book readers have a problem with The Killing Joke. To be fair, there are some aspects to Alan Moore and Brian Bolland’s work that I enjoy, especially the philosophical dilemma of what turns men like Batman and the Joker into Batman and the Joker. But there are parts of the book that are problematic and you know exactly what I’m talking about because, should you decide to go all the way with this movie, you’re going to have to address it within the story. Namely the shooting, torture, and sexual assault of Barbara Gordon by the Joker. If you could please just do me the solid of taking this out of the movie, along with Barbara, I’d appreciate it. And if you’re worried about the integrity of the story without Babs in it, let me assure you…

Just hear me out for a second and bear with me because I’ll most likely be covering story elements that you’re well aware of but are important to point out nonetheless. Within The Killing Joke, Joker, as a means of torturing Jim Gordon and getting at Batman, shoots Barbara, paralyzing her, strips her naked, photographs her, and it is HEAVILY implied that she’s raped. And this is just to torture her father and Batman. The only times we see Barbara are when she’s shot, when Jim is shown the photographs, and when Batman goes to her in the hospital. At no point in this story does Barbara make any decisions or take any actions that effect the course of the story. She is a PAWN, a piece of the story that is actually about Batman, Joker, and her father. This is the definition of both “fridging” and the “sexy lamp” tropes. Barbara serves no narrative function except as an example of the Joker’s sadism in order to provide motivation for other characters.Quite frankly, I could do without it. Preserving the integrity of the story doesn’t have to include the maiming and humiliation of a character who currently has one of the top-selling books at DC Comics, one that has attracted more young women and new readers than DC could have hoped for. I can only imagine what will happen when those girls and their parents decide to pick up the new animated feature that includes Barbara and the horror that would result from watching such intense scenes of violence committed against a woman. Yes, Jim Gordon is tortured as well, but he gets resolution at the end as well as a moment to assert how his moral compass hasn’t changed despite the machinations of the Joker. Barbara gets no such moment.

And please, if we could avoid the “but she becomes Oracle” part of the justification for including Babs in the story should you choose to do so. She doesn’t become Oracle in the book and it’s a logical fallacy to assert that The Killing Joke is directly responsible for her new identity. There was no plan in place for Babs to move on as a superhero post-Killing Joke and she was all but written out of the comics until Kim Yale and John Ostrander laid the foundations for her second life in Suicide Squad and Manhunter. The Killing Joke is only responsible for showing just how much regard for Barbara DC Comics had when Len Wein gave Alan Moore permission to “cripple the bitch.” The Oracle argument is further invalidated when one considers that amidst the New 52 reboot DC editorial could have easily erased The Killing Joke from Babs’ backstory, putting her in the position of starting from scratch as Batgirl without the story hanging over her like the Sword of Damocles. Instead, editorial kept The Killing Joke as canon but eliminated her time as Oracle due to the truncated timeline. It was more important to keep her paralysis and assault then it was to show her character growth as a hero operating out of a wheelchair. I mean, are you planning on doing another animated movie where we get to see the rise of Oracle? Anything including Batgirl? I see the next movies after Killing Joke are Batman: Bad Blood (featuring Batwoman) and Justice League vs Titans slated for release next year but wouldn’t an animated movie celebrating Batgirl or Oracle make more sense as a followup?

I ask only because the current Batgirl book from the creative team of Cameron Stewart, Brenden Fletcher, and Babs Tarr is ridiculously popular and directly responsible for bringing in new readers to DC Comics, many of them young women and little girls. The tone and the style of the book is lighter and brighter with an explicitly feminist mindset. The team has gone above and beyond to ensure the integrity of Barbara Gordon/Batgirl while keeping her accessible to all readers regardless of gender or age. The kicker being we’ve already gone through a Batgirl/Killing Joke controversy, one where the team asked that the Joker variant cover be removed from their book because it was the antithesis of the women-positive message the team had cultivated in actively distancing the book from the Killing Joke as much as possible.

Bottom line: The Killing Joke is toxic when it comes to attracting female readers and I doubt the animated movie would fare much better considering the most recent batch of animated movies have been all but gleeful celebrations of the PG-13 rating with plenty of violence and coarse language that makes it impossible for me to show them to my five-year-old nephew who loves Batman. It just doesn’t make sense, from a business perspective, to develop an entire line of superheroine products and merchandise for girls aged 6-12, one of those heroes being Batgirl, and then put out an animated product that features said character being horrifically injured and abused. I doubt whoever ends up writing the copy for the DVD/Blu-Ray is going to mention what happens to Babs in the description, so won’t that be a fun family moment when mom and dad buy their young daughter the newest animated movie that features her favorite hero only to watch the awful events that occur.

As a female reader, as a person who loves the animated movies and DC Comics, please write Barbara Gordon out of The Killing Joke. I would prefer she not be featured rather than sit through a movie that’s just going to be uncomfortable on all counts. And this isn’t a case where “then don’t watch it” matters. What matters is the continual validation of The Killing Joke and the insistence from DC Comics and some fans that it’s an essential story regardless of how it treats Barbara. There are others ways to torture Jim Gordon and I’m sure you have plenty of talented writers who could think of a million ways to push him without using his daughter.Thank you for your time,SamP.S. That Batman short was awesome!

Remember folks there will always be naysayers out there, be safe.

Pray it never comes to this

when did we cross the line?

Race Alert: Joe Chill might be black in BvS DoJ

Either he is black, lightskin, white with dolezal's blackface or middle eastern looking.

Will this traumatize young Bruce Wayne to hate black people?

How about the Batman fanbase, will they look at black characters differently?

whats up with this, thought they aim for diversity and not race bait

Image Comics just made a bold statement about DC/Marvel

“If we keep on our current trajectory, we’ll overtake DC in less than five years,” predicts Kirkman, who has been a partner in the company since 2008. “Then it’s just a hop, skip, and a jump to toppling Marvel.”

Possible Spoilers: This may or may not be a leak for DoJ script, judge for yourself

Believe it or not.

Geoff Johns and that mary sue

Blogs Created:
25 blogs
Most Commented blog:
Who do you think gets the treatment on the next movies/adaptations?
Total Comments on blogs:
366 comments