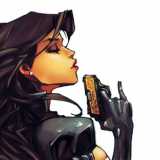 Character design for my alter ego :D Maybe I'll finally get around to making that comic book...

...at least until robots take over the world:
Digital or analog? For comic books I mean. I've only used the marvel database online when i'm bored on the internet, reading whatever free issues they have. On the other hand, I no longer have a comic book outlet down the street (it's located about 5 hours south now *sigh*). So is it worth it? Should I buy a marvel account? I mean, god, there's DC and Top Cow and Vertigo too, how can I only subscribe to one publisher?!!? Has anyone else done it? What do you advise??
Thanks viners
<3 V

I love you comicviners.
I know i've been MIA for awhile, but I still think about you guys from time to time.
That is all.
<3

A question I have an opinion on! ha. But seriously. I think Hush is one of the most twisted villains. He's also super under appreciated. But the fact that he tried to off his parents so he could be wealthy, and then the whole master mind thing in Hush vol. 1 and 2 just really swept me away.

lol, it kind of blew my socks off. I knew it would be fantastic, but.... man. I loved joker and hated him so much. Two face was good, definitely shadowed by Ledger, though. They better give him an oscar on a silver platter, that's all I'm saying.