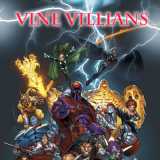 The VV has once again risen from the ashes that buried it, years ago. This time however, the Soverentiy is under new leadership. Ziccarra Liafador queen of the forgotten culture Ninjeta has taken the VV by the horns and commands it as her own. With that said anyone, nation or, team that, directly or indirectly interferes with the plans of the Vine Villains Shall; engage themselves in war with the Vine Villains. We talk like this because we can back it up.

P.S we have dungeons and we are not afraid to use them.

Hands down no question about it.

Merc With a Mouth

We're Back In Business

broadcasts a message to the Vine

Hello Viners, a new RPG is in the making, I won't explain it all now but I will let you know it concerns a power hungry tyrant returning to the Vine and waging war on all who do not join him, and bathing the Vine in their blood!! It will be time for everyone to decide whether they want to be remembered as someone who gave their life in a futile effort to stop Armageddon or if they want to live a long life filled with all the pleasures of this world...I know you all will make the right decision.

(this RPG will hopefully begin sometime this week but at the latest, early next week)
1 Comments

Many great empires have ruled this world spreading their names and glory across the know world. Rome was one such power and the ruled with an iron first. Much like the VV had once ruled the Vine with an Iron fist. And much like Rome began its decline the VV has done the same. Where Rome had barbarian hordes knocking on its doors. The VV has new teams that have spawned up from the Vine and fellow old teams that now wish to see there fall.

The Vine Villians surrounded by enemies Goods Neutrals and even fellow evil brothers.

They have all come to finally lay the beast know as the VV to rest.

Shall the beast die or shall it raise back up.

Kill or be Killed.

Any teams may enter but only those part of teams may join.

Setting is simple each match takes place inside a Dome there is no escape the dome until your opponent is dead. Enter at your own risk. Inside the doom which is about the size of a football field. The earth is hard the dust and sand coated in blood of the fallin.

Win a Match your team gets a Point

Each Month points are counted and total team with the most is declared Champions for that Month.

Waiting Conformation Rebuilding If your on this list and wish stay with the team let us know. If you don't wish to, let us know that as well

Vine Villians a new rpg is about to start its time to take a stand and do what must be done.

Vine Risk is the name teams from across the vine have come to compete don't mess this chance to prove we are the greatest.