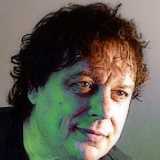 Vincent Deporter is a Belgian artist who works in both comics and animation. Deporter got his start in comics working as an assistant to Jean Graton, before selling his own strips, as Mike Deporter, to Spirou. In the last decade, after relocating to New York, he has worked on DC's line of comic books adapted from popular animated cartoons, like Scooby Doo and Ed, Edd n Eddy, and has also inked many of the Batman, and Superman style-guides. He has also worked for Nickelodeon, notably on Spongebob Squarepants.