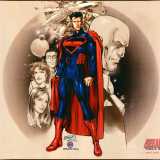 Stephanie Trevor was born the daughter of Princess Diana of Themyscira and American soldier Steve Trevor in 1953, the same year that Clark Kent and his wife Lois Lane Kent gave birth to their daughter Kara Kent. Being born half-Amazon, Stephanie possessed half of her mother's superhuman strength. In 1964, Stephanie made her debut as the teenage hero Wonder Girl when her fellow superheroes and friends Wally West (Kid Flash), Bruce Wayne Jr. (Robin), and Kara Kent (Supergirl) were held hostage in Central City by the villains Gorilla Grodd, Mirror Master, and Weather Wizard. After succeeding in taking down the three villains together, Stephanie agreed with her friends' decision to form a superhero group of their own called the Justice League of America.

Sometime in her adult life, Stephanie took over the role of Wonder Woman and became the chairperson of the Justice League of America. Around the late 1970s, Stephanie spent a thousand years in ancient Greece (though in present time she was gone for only three years), yet during that time she felt the pain of Kara's absence when she was killed by her brother Joel Kent. In 1986, Stephanie took the initiative to try reining in Bruce Wayne Jr. when his rage over the death of his first wife Kara started to overtake him to the point where he almost killed Alan Scott (Green Lantern).
6 Comments