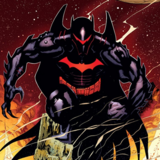 I forget it... This red haired woman Owl may be the current girlfriend of Bruce Wayne now that he had no memory?

Too weird this ... It's like several alternative Bruce or Batman arise suddenly ..

Bruce with the court, confuses me.. Why? after weeks without memory and return he to his mansion and they want to be mayor Bruce and use as a peon?

Bruce and Alfred said to be 30 minutes before the scenes above.

By the Way, In GREG CAPULLO Twitter I saw Bruce will use the BAT ARMOR of Endgame to fight Bloom..

The fact that one of the TTG producers is working on this has me concerned but I'll reserve judgement until it airs.

Hoping its good. I'd be nice to a DC cartoon to watch each week. I hate that I missed out on GL.

Producers of TTGO? Then we will know the result..

YES. THIS MUST END.

This should have ended long ago, have elongated silly things .. Olympic resurrected him, right? So why they will not return his powers? INUTIL GODS ..

NO, a lot of nonsense more to retrieve their powers.

Now, other IDIOT for Vandal army .. the twins probably appear in an episode to be defeated.. Although I do not care.

Bat Gordon, Aquaman enemy of Atlantida, criminal Hal Jordan, can tolerate all that but ... the truth in the majority, has done nothing but disgust me.. I hate this saga..

Superman is too seems (especially in hair) to the JL 3000 Superman, and his personality, incredibly bad..The only bad thing with WW his suit(now returned his old suit, good) but his personality has not undergone radical changes as Super.

Yes, I saw the chapter, the last covers not lie

BRUCE WAYNE REBIRTH, 2 DAYS before REBIRTH in DC.. either this or not, this rebirth will be somewhat smaller...Or add something old that had not yet added ..

Unable to complete restart .. Besides, DC just transform Starfire and characters in Burnside .. Yes, they have changed their style with it too..

DC complet Restart and I get out of here... Again from 0 often disgust..

Or DC may decide to create a Earth, in argument of the films in the coming years..with bat-affleck of 45 years, the Superman, Lex Luthor Jr. and all that go out in the movies.. Bah, this idea is stupid, imposible .

Bloodlines: This serie, I heard it was a failure of the 90.. at least the girl of spikes.. not as bad as the original guy I had before these spikes .. the other seems a blue hulk

Harley: I hope that over the years Harley me not become so boring, so much to see her, as Deadpool these months..

Fools should not attack..Me too I will stick Ivy as antihero...

I do not expect to see students Gotham Academy .. Maps seems rather high here ..

jaja... Good.. So I feel Deadpool.. I never look for Marvel but I see that character all around, that peace when you finish your movie and not see it all over the place.. I do not want to mess with their fans .. but I get tired seeing so much .. My cousin fan of the character, the other day playing with this in a game, although he does not know of comics .. I told him that was marvel.

I do not have any problem.. but .. it will be 2 series with Harley (Suicide Squad and Harley Queen) and 2 miniseries, black book an this serie...

Instead they could make the New Birds of Prey(but the girls look like at the beginning .. and not as Burnside) or continueSupergirl comic, although there will be one of the TV series ..