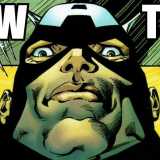 27 Days Till the Winter Soldier Premiere!

For the benefit of any readers currently reading or looking to start reading Ed Brubaker's Captain America run; I've compiled this trade paperback checklist. This reading order is a complete listing of all Marvel comics that Brubaker ever wrote featuring either Steve Rogers or Bucky Barnes as the central protagonist, and is complete to the best of my knowledge and ability. If I've missed anything, let me know in the comments below and I'll update the checklist.

Winter Soldier is the start of Brubaker's work on the character, and collects Captain America (vol. 5) #1-9, and 11-14. The storyline was originally collected in two separate trades. There is also a Captain America Winter Soldier Hardcover that was released in conjunction with the MCU movie, and that edition features extras such as bonus covers, Epting's sketches, and Brubaker's original pitch - for a heftier price, of course.

Red Menace collects #15-21, as well as the 65th Anniversary Special. Like the Winter Soldier trade before, this storyline was originally collected in two separate trades.

For those of you who can afford Omnibuses, the two Captain America trades written by Brubaker have also been collected in Captain America Omnibus Vol. 1. The omnibus also collects the #10 House of M tie-in (see below), and #22-25. Do note that the omnibuses, for the most part, are pretty pricey as I believe they're no longer in print. But if you're willing to shell out the cash - by all means.

The next chapter of Brubaker's run features the death of Steve Rogers in the aftermath of Civil War, Bucky Barnes' redemption for his actions as the Winter Soldier, and the latter's eventual assumption to the mantle of Captain America.

The Death of Captain America collects the entire saga, specifically #22-42 and the Winter Soldier Winter Kills one-shot. These stories were originally collected in four separate trades. #22-24 and the Winter Soldier one-shot take place during the events of Civil War. The following issues occur after Steve Rogers' surrender and arrest in the final battle of the event.

The Man with No Face collects #43-48, and Road to Reborn collects #49-50 as well as #600-601. At this point in time, Marvel decided to renumber its books in celebration of the company's 70th anniversary. Essentially, all past and present volumes of Captain America were compiled together, and so Captain America (vol. 5) #51 was renumbered to just Captain America #600. Other books like Invincible Iron Man and Thor experienced this weird renumbering too.

Anyway, Steve Rogers finally comes back to life (spoiler!) during Captain America Reborn, a trade that collects #1-6 of the miniseries, as well as the Reborn Digital Prologue.

The third chapter of Brubaker's run features Bucky's adventures in his newfound role as Captain America. Of course, there are other stories out there that feature Bucky-Cap (most-notably Bendis' New Avengers, Avengers/Invaders, Invaders Now! et cetera), but these are the stories that were exclusively written by Ed Brubaker.

For Omnibus readers: The Trial of Captain America Omnibus collects all of the above issues, as well as the Steve Rogers Super-Soldier miniseries and the first ten issues of Captain America (vol. 6), both listed in later chapters of this checklist.

Chapter IV runs roughly concurrently with the events of Chapter III, as during this period Bucky was Captain America while Steve took over Nick Fury's old job. Steve Rogers Super-Soldier collects #1-4 of a miniseries starring Steve in his new role. Secret Avengers Vol. 1 collects #1-5, and Vol. 2 collects #6-12. This was a series where Steve led a covert team of Avengers, and the book was also written by Brubaker.

Finally, we're at the end of Brubaker's time with the character of Captain America. To start off, Fear Itself collects #1-7 of the miniseries, and the Fear Itself Book of the Skull one-shot. While the event itself isn't essential reading and wasn't written by Brubaker, it does feature the seminal moment of Bucky's death at the hands of Sin/Red Skull/Skadi (spoiler!) so it's worth picking up. The trade also collects the Book of the Skull one-shot which was written by Brubaker. The issue stars Cap and the Invaders, and serves as a prequel to the main event.

Captain America & Bucky was published concurrently with the new Captain America volume, but its stories are essentially flashbacks to Steve and Bucky's adventures in WWII, so really they can be read at any point in time. These were written by Brubaker with the aid of other writers. The Life Story of Bucky Barnes collects Captain America & Bucky #620-624, picking up from where the Prisoner of War TPB ended, and Old Wounds collects #625-628 and a What If? #4 from 1977.

The Winter Soldier solo series was launched in the aftermath of Fear Itself when Bucky was revived (spoiler!), and decided to readopt his old identity to right his past wrongs. The story was originally collected in three separate trades, but this edition collects all #1-14 of the series, as well as Fear Itself 7.1 - a tie-in which depicted Buck's resurrection. While the Winter Soldier solo series was published around the same time as the two Captain America volumes, it can be read on its own.

This section is comprised of Cap-related material that Ed Brubaker wrote, but either a) don't factor into his ongoing story, or b) only feature Cap or Bucky in a supporting role as opposed to a starring one. These stories are not essential reading for Brubaker's run, but I've included them here for completionists, and they're still all very well-written stories for the most part. If nothing else, they give more insight into the history of Captain America.

The missing issue from Vol. 5, #10, is a House of M tie-in, and was not reprinted in any Captain America trades, only in the House of M: World of M, Featuring Wolverine TPB. This issue takes place out-of-continuity and has no relation to the ongoing Winter Soldier story-arc.

The Marvels Project collects #1-8 of the miniseries. While the original collection was published some time between Reborn and Two Americas, the book can really be read at any point in time. The miniseries deals with the rise of superhumans during WWII, and the formation of the Invaders - the superhero team of the Allies during the War. It has some elements that tie in to Brubaker's Secret Avengers run, and has a large ensemble cast that includes Cap and Bucky.

To cap this off, I've also listed some supplementary reading material. None of these stories were written by Ed Brubaker, but they offer some useful context for the greater Marvel Universe during the time of his Captain America run.

The first are the major Marvel events. All events listed here had a great impact either on the character of Captain America, or on Brubaker's run. Avengers Disassembled serves as a prequel of sorts, as Brubaker's first issue begins shortly after the Avengers disband. Secret War explains the disappearance of Nick Fury between the Winter Soldier and Red Menace TPBs.

Civil War is self-explanatory, and sets up The Death of Captain America saga. Secret Invasion features Bucky's first major appearance in the greater Marvel U. Siege has the reunion of the Avengers' Big Three after years of in-fighting and disagreements, as well as the first major appearance of Steve Rogers in the larger MU since the events of Reborn. All of these events are available in their respective trades.

New Avengers by Bendis picks up post-Disassembled and before Civil War, and has Cap playing a pretty major role in the team. Cap's death and the subsequent outcome of the Civil War also plays a large role in the series, as do all of the following events like Secret Invasion. Bucky, as the new Captain America, also becomes a member of this team in its later volumes.The subsequent Heroic-Age-era Avengers book (also by Bendis) doesn't really tie in to Brubaker's work, so I've elected to ignore it.

The entire New Avengers series is available in thirteen separate trades beginning with New Avengers Vol. 1 Breakout. There's also a New Avengers Omnibus Vol. 1, but this only collects up to the sixth trade paperback. The omnibus also collects Avengers Disassembled however.

Lastly, Fallen Son was a 5-issue miniseries by Jeph Loeb. Sigh...it's Jeph Loeb, so it's not the greatest, but it provides some interesting insight to the reactions of Cap's friends in the wake of the icon's death. Best read during The Death of Captain America storyline.