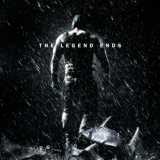 Wow. I did not realize that that is how they closed Grayson. seems like a big waste to have everyone forget....thats a frustrating aspect of DC storytelling: Forever Evil had a chance to change the status quo but they did not stick to it. I mean, we could have had Nightwing again but explore how his role changes since folks know who he his. anywho....

I like the idea of Waller keeping around info revealing that Grayson is Nightwing. I would have to go back to Nightwing 30 to reread the details of why he joined Spyral but I imagined this as being a much more personal thing. I remember Spyral knowing lots of different identities so it was kind of like he was saving everyone. this is Babs and damian and alfread he is thinking about (not to mention bruce and the others). I imagined that as being a much more personal reason for him agreeing to this. as the "older brother" he feels responsible or burdened to protect them. maybe it isnt that different than The Spyral reason, though.

I am fine with Waller having something else of interest to Grayson but id want it to be something that impacts someone else....you know, he is sacrificing for someone else.

I just reread your idea and I do find it interesting....DG having a family.

Its funny: I reread your ideas regarding Rose and I think we were thinking the same thing. not sure what idea of their relationship I conveyed but I meant it almost exactly as you characterized it. rose is there to watch over him. I think she is characterized a bit differently in the N52 than she was before. You said they hinted at history between nightwing and rose in the new deathstroke series? can you show me where? im not reading that book right now but that would be great to see.

Hmm...I dont think I agree about Nygma, however. I probably did not make a good case for him being there but I really think the dynamic he adds would be valuable. There is the obvious hero vs villian bit. theres the fact that Nygma would be older than Grayson. I read Snyder's Death of the Family (actually, i think it was a backup to that run) where he was basically characterized as a genius. Grayson is my favorite comic book character and is a lot of things: an amazing leader, really sharp guy, a great field commander, excellent detective and a superb tactician. I have never seen hm characterized as a genius in the comics, though. Not saying he is dumb by any means but that doesnt make him the "chessmaster" type. I think that is what The Riddler could bring to the table

Harley is so different depending on who writes her. A Connor Quinn would interact differently than the one from Suicide Squad, dont you think? but I agree that they wouldnt be buddy buddy. I like your characterization.

As for the suicide Squad scenario, I was thinking of leveraging all the stuff thats happened in Forever Evil and Grayson. for instance, everyone knows that grayson is nightwing. as for the "imprisonment", I have not researched this but i would think that there has to be some consequence to working for a foreign intelligence service. maybe not. Spyral knew who most of the heroes were so its not a stretch that Waller could know. and she is twisted enough to keep it to herself. The idea of him getting in trouble becuase of his work with spyral also adds tension between say Babs and Bruce because she knows he joined spyral at bruces behest and that he is now being a sacrificial lamb, if you will.

I like your suicide squad team except I would add Rose Wilson as his partner (kind of like they characterized Flagg and Katana in the movie...someone who had his back that he could trust a little more than the rest. yes, i know they arent exactly friends but i figure Waller would have paid her to keep Grayson alive). I would also add Edward Nygma to the team as the team coordinator/tactician. He would not actually go into the field but would kind of be their Oracle.

I also agree that FLagg and grayson would butt heads.

@nightwingism: I can dig it. what I like about it is that Nightwing is possibly the only member of the batclan that would have compassion on Harley and actually give her a chance if something was going down and she really needed help (hes kind of a bleeding heart). it could either be a serious series or more light-hearted because they are both kinda goofy.

If they were to go the Suicide Squad route, I actually kind of had that as the first step Waller blackmailing him (before he becomes a public hero). waller blackmails him, throws him in belle reve but its all a pretense because she has had her eye on him for a while because of his leadership potential (The Riddler actually recommends him to Waller-long story). so he works with the Suicide Squad for a while as their leader

I would really like to see these two together in a book. Working together or as enemies. Would you buy this book? how would you write the story?

Wow. I had never heard of Manhunter before. just read up on her...she sounds cool! and her unique backgorund would make her really interesting to play off of Grayson.

On another note, I would really like to see Grayson and Harley Quinn team up in a book. I dont think that pairing would really fit with the idea you have presented or mine but it would be cool. rose Wilson would fit in well with the team you suggested. so would either Powergirl or Donna Troy. im really intrigued by the idea of somone with immense power working in a covert ops/under-the-radar environment.

@nightwingism: ......I would read that book. lol. would artemis be characterized like the version from young justice?

@nightwingism so its kind of like the A-team (DCU edition)!

Did you have any specific people in mind who would form his team?

So this is a bit late but what if DC used the fallout from Forever Evil, and Dick's run as a Spyral agent to set him up as the DCU's "hero with a face" like Captain America or the Fantastic Four? For those looking to see DG grow out of Batmans shadow and do something meaningful and new, seems like this could be one way. Plus, if they give him a team, its a whole new opportunity to either re-introduce some little known characters or create some new ones and showcase Graysons mentoring/leadership skills.....all the while exploring the difficulties of being a celebrity/government backed superhero and the strains it puts on his relationship with the Batclan.

Ive kind of had this idea that Waller arrests him and blackmails him into becoming this public hero in order to prevent her from outing the rest of the Batfamily's identities...