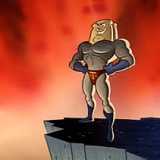 I'm going to run that although it would be a close call, I think that Colossus would take the win in the end.

Aric is a barbarian who has only known war and fighting his entire life and basically has multiple centuries of knowledge worth of combat victories under his belt, partially from Romantic times and later during the present, so he is no stranger to fighting. He has the alien armor, which grants him increased physical abilities, flight, energy projection etc as well.

Aric is not about studying his enemies for weakness and exploitation. Whereas he does have greater mobility advantage and could use this to his advantage, his style seems to be run in guns blazing, fists flying, shoot 'em all and ask questions later.

Piotr while stronger physically, cannot chase into flight or move anywhere near the speed that his opponent can.

Both start on the street level and aware of one another. Colossus hurls a bus and XO barrels straight ahead, smashing through the airborne projectile. XO shoots at Colossus while closing the gap, but the organic steel repels the energy harmlessly. When it comes down to the two being at melee range, XO definitely has the lion's share of the speed, but Colossus has enough sense to anticipate where XO's strikes are taking him and plant just one well timed blow: not enough to kill, but enough to incapicatate and claim the win.

Even if XO wanted to try and make an airborne assault, he has no way of actually harming Colossus, and as his only other method of gorilla tactics would be to punch through the street level into the subterranean sewers or underground train lines, neither of which are likely and both of which would end up being either a case of retreating or another entry into brawling range. I still do not believe Aric would take either of these courses, however, as his barbarian nature isn't about the "dirties, sneakiest under-handed-est" fighters being the ones that win, but the one who is the strongest being able to overcome his adversaries. The ballte isn't won by Colossus because he is stronger, per se, but because of his ability to withstand attacks and think and plan to counter-strike.

My IRL name is William, but people usually call me Bill. I am 28 (until Jan. 6th ;) )and I live in Oxford Connecticut, USA. I am a professional carwasher for Lexus, though I am in training to build helicopters for Sikorsky. I enjoy drawing (poorly, if I do say so myself) hiking, everything winter, traveling to foreign countries and posting occasionally on Comic Vine. I also like to complain about how better things used to be before they went through that last update. AND, Xavier is the coolest person here because he is AUSTRALIAN!!! ;D

uh, and I quote the Genie from Disney's Alladin: "Bee yourself!" -OR- Be Batman. Chicks dig Batman.

Honestly, things like racism/sexism/otherkindsof-ism don't translate very well to the sort of level he's on. -"What can you do?" -"Rearrange matter based on my whims and also I'm of African descent and I'm homosexual~" -"I dislike you because I'm a bigot" ...and doesn't the final panel just draw itself in your minds? I mean, really? People are stupid, but not THAT stupid. Its easy to hate something you are afraid of because you don't understand it, but really tough when you're own immediate demis is staring you in the face.

This video is a duplicate of a previously uploaded video. ...no video... :*(

Banned for insinuating that gibberish is a difficult username.

I kind of liked the fact that the game itself was non-linear.  Sure you HAD to kill Thing (no matter how much you liked Thing/hated playing with earthquake ballerina) but WHEN you killed tThing (or anyone else) made a difference on what you got in the game.  I (finally) unlocked everything by doing it "right" and it really ticked me off that I only skipped 1 stage the first time I played through and beat it.

Character-wise, the Imperfects struck me as odd.  I could have sworn there was already a "Brigade" and I wanted to say he was loosly associated with the x-men.  Also Hazmat seemed familiar.  Aside from that, the other characters seemed like knock offs of pre-existing characters: The Wink=Nightcrawler, Solara=Human Torch (and he IN the game!  WTF?!)

Over all the game WAS fun to play, extra fun if you were playing a friend and you tossed them off theedge of the map lol butat the same time, it was one of the last games that you actually had to try and work at beating.  Newer games might take hours/days/weeks/months to get through, but its just beacuse they're time consuming, not challenging.  Imperfects was the last *new* game I played that presented me with a challenge in a one player fighting/story game.

...now if I could only manage to grind my levels in CoD enough to get a decent gun so I can finally beat my neighbor... lol

#9  Edited By VenomMagus
Rain
10 years ago

#10  Edited By VenomMagus
Faked
10 years ago