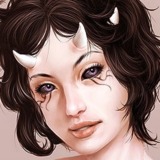 With a bit of a disguise, Vel'aaru could easily pass for human. If, y'know, it wasn't for...

She has a slender, girlish figure, with skin a nearly inhuman shade of white. It is indisputable, however, that she is an excellent physical specimen, with slightly-enhanced agility and strength that belies her alien nature.

While less immediately apparent, Vel'aaru is able to speak every living language, and possibly some others. However, she speaks all of them with a very noticeable accent of unknown origin.

'Exuberant' does not do the girl justice. After leaving the Xag-yg Academy it was encouraged for the girl to use her newfound skills to take a military position, or another high-importance task within her own mysterious alien government. Vel'aaru, however, would have none of it. Stealing a craft for a joyride, the illian sped towards Earth in search of adventure, not knowing that it was the type of playground she could not have possibly prepared for.

Through her past adventures, which included extensive torture, Vel'aaru has become somewhat hardened. While she retains a light-hearted attitude in non-dire situations, she is now much more adept at "getting serious" when the situation demands it. Her combat experience has increased greatly -- and unlike other illians, she has become aware of her own mortality.

Vel'aaru's natural illian abilities are negligible, though her body does have some minor differences to that of a standard human. Her muscles are longer, denser, and more pliable, and her tendons show an impressive flexibility. These attributes allow her to emulate the physical fitness of a low-level human athlete (such as a Pilates instructor), though in all other respects she is a teenage girl. In fact, due to a lack of immunities built up to everyday terran bacteria, she has to take special precautions to not become very ill from the smallest infections or viruses.

Vel'aaru's strengths come from the things she studied at the Xag-yg Academy, which included a wide variety of Cosmic Occultism and advanced alien technology. While she was nowhere near the top of her class (missing several of them), the basic knowledge of an illian college-girl is enough to lay waste to a small human nation without contestation.

Looking a thousand years back in human history, the level of standard intelligence and technology has vastly changed. A millennium ago, only the best and brightest could read and write. Mathematics were for only the most learned scholars. Trebuchets and greek fire were the pinnacles of mankind's invention.

Today, however, even twelve-year-old children can do long division, and a hand-me-down Gameboy is infinitely more advanced than the most astonishing marvels of days past.

Vel'aaru is, to us now, as we were to the mankind of a thousand years past. She may just be a college girl, but she can create an atomic bomb the way a normal child may create a switchboard, and takes courses in Cosmic Occultism techniques the way a normal college kid may take Calc 2.

Among the CosOcc and tech abilities Vel has shown are:

She also has a ship known as The d'Aubigny, named after the french folk heroine Julie d'Aubigny.